An off-duty Waterloo Regional Police officer, while driving home from work, called dispatch to report a structure fire at 2356 Snyder's Road East, at the far east side of Wilmot Township in southwestern Ontario. 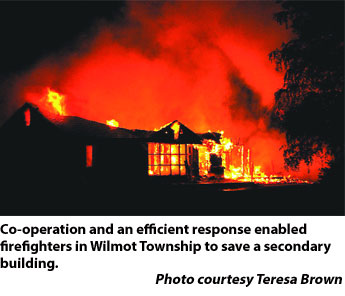 At 0308
on Sept. 28, an off-duty Waterloo Regional Police officer, while
driving home from work, called dispatch to report a structure fire at
2356 Snyder's Road East, at the far east side of Wilmot Township in
southwestern Ontario. The Baden Station of the Wilmot Volunteer Fire
Department was paged and immediately upon responding to the fire hall
heard from dispatch that they had a structure fire with flames visible,
confirmed by police on scene. Additional 911 calls were coming in; some
of these were indicating explosions heard from the burning structure.

Clearly, a quick, thorough and organized response would be required.

While
still at the hall, the officer in charge for Baden immediately asked
dispatch to tone out Wilmot Station No. 2 in New Dundee for a full
response. Baden initially responded with 11 personnel (ultimately 18
Baden firefighters responded) and all four trucks – the rescue, tanker,
and two pumpers, and New Dundee responded with 12 personnel and a
pumper, tanker and rescue. Eventually, this fire would prove to require
a total of 38 firefighters and numerous other personnel over the course
of 14 hours: it would also prove to be a successful suppression and an
excellent example of the difference an efficient response on all fronts
can make.

The address, at the far east side of Baden's territory
was about nine kilometres from Baden's station. When about three
kilometres from the scene, Baden's OIC saw signs of flames in the night
sky and immediately requested Kitchener's tanker to respond under the
mutual-aid system. Ambulance responded with Baden, and Box 690
(Waterloo Region's fire canteen) was also en route, as its members
monitor dispatch at all times and respond automatically to working
fires. Meanwhile, Waterloo Regional Police were able to confirm that no
one was home in either house. Even as the initial responding station
was still en route, planning and preparations for a large-scale fire
attack were under way.

Baden units were on scene within 10
minutes of receiving the alarm. Upon arrival, the officer in charge
(now the incident commander) saw that the house – a single-storey
bungalow on the north side of Snyder's Road – was fully involved. About
three-quarters of the house was engulfed in flame and the structure was
obviously lost. However, a secondary house, very close by at E4, was
also on fire. IC immediately ordered a defensive attack of the primary
structure and an offensive attack on the exposure house. The IC
assigned a Baden captain to run fire attack while New Dundee's district
chief was safety officer and a third Baden captain handled water sector.

While
agent was applied to both houses by 0328, water supply was an important
challenge. The property – virtually on the edge between Wilmot's and
Kitchener's territories – had no hydrant service. Once again, however,
it was a swift and well-organized effort that solved the problem. A
portable tank was set up in the centre of Snyder's Road and all three
tankers ran relay to a hydrant just across the township boundary in
Kitchener.

Throughout the attack, the three tankers transported
a total of 30,000 gallons of water to the scene while firefighters
controlled the further spread of the intense primary fire and
extinguished the exposure fire.

At 0448 the IC declared fire out
on the exposure house. Fire control on the primary structure was
achieved at 0502. A cause for the blaze had yet to be determined at
press time. The Ontario fire marshal responded that morning and
conducted its investigation throughout the day as Baden firefighters
helped to dig through the rubble. And rubble was all that was left. To
anyone who saw the fire it was obvious that the house had been lost
well before the call came in to dispatch early that morning.

The
exposure house, however – a mere three metres from the fully involved
building – sustained just $50,000 of damage on its west side. This
success was made possible by the co-operative efforts of many different
agencies: the sharp observations of the Waterloo Region Police; the
thoroughness of Wilmot's volunteers and Kitchener's professionals; the
smooth operation of the mutual-aid system; and the essential support of
ambulance and canteen for firefighters' safety and rehab.

Well-organized
teamwork made a difference. "Before our trucks were even on scene the
police had done the footwork to confirm no one was home, ambulance was
already responding and Box 690 arrived without me having to ask," said
the IC. That disciplined response by those agencies, along with the IC
calling an immediate second alarm and mutual aid, made it possible to
save the secondary house despite the massive fire next door. The lesson
here is don't wait to call for help. "That house is still standing,"
the IC said, "thanks to everyone working well – and efficiently –
together."

Teresa Brown is a freelance writer and a member of Box 690, Waterloo Region's fire canteen service.