Geographically, the Corporation of Delta fills the southwest corner of Metro Vancouver, surrounded on three sides by water – the Fraser River to the north, Salish Sea (Straits of Georgia) on the west, and Boundary Bay on the south. 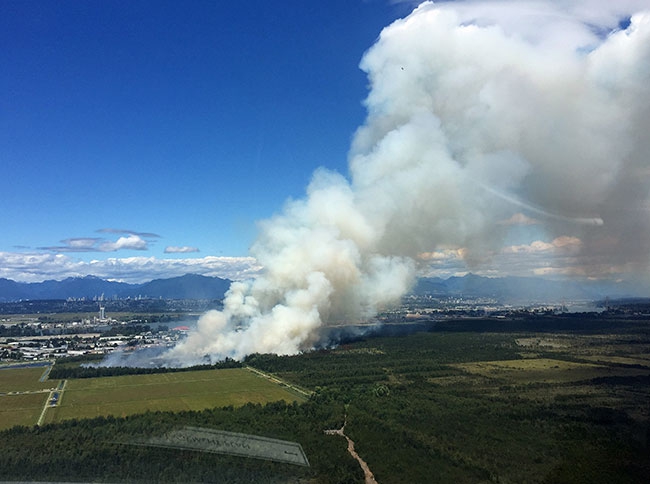 The only land boundaries are the City of Surrey on the east side and Point Roberts, a tiny, orphaned piece of Washington State that dangles below the 49th parallel from the southwest corner of the municipality. Looking down from space, the municipality appears to have a huge empty space in the middle. The empty space is Burns Bog, the largest undeveloped urban wilderness area in North America. Originally as large as 4,900 hectares, after a century of farming and development the bog now covers about 3,000 hectares, of which 2,042 hectares comprise the Burns Bog Ecological Conservancy Area, home to several endangered species and providing vital stopover for migratory birds.

The bog was mined for peat until 1984, leaving a labyrinth of more than 100 kilometres of ditches and ponds that were used to drain the bog. Fire was a constant threat in the bog over the years; fire burned 170 hectare in 1996 and more than 200 hectares in 2005. Fires in the bog are difficult to extinguish and can smoulder underground for extended periods. In 2004, as the result of a referendum, the ecological conservancy was created when four levels of government – federal, provincial, Metro Vancouver and the Corporation of Delta – jointly purchased the 2,042 hectares that now form the conservancy area. Due to the risk of fire, the area is closed to the public and access is tightly controlled as work is carried out to improve the ecological health of the bog after decades of industrial peat extraction. Metro Vancouver Parks is responsible for day-to-day operations and access control.

At that time in 2004, the Delta Fire/Rescue developed its Burns Bog fire-management plan, which is now being modified as an interface fire plan for the entire municipality. Every year in April, fire crews train with the plan up to the provincial standard for wildland firefighting. The training scenarios also include personnel from Metro Vancouver and BC Wildfire. At the same time, Delta’s operations chief and prevention chief meet with BC Wildfire and Metro Vancouver staff and fly over the bog to identify any new hazards. With the partnership in place, any response to the bog is a multi-agency response.

The first call came in at 11:40 on July 3, 2016, the holiday Monday on the Canada Day weekend. The fire started near four radio broadcast towers on the north-west perimeter of Burns Bog, near 80th Avenue and Highway 17. Delta Fire and Emergency Services senior management had been enjoying the day off. Chief Dan Copeland was shopping in New Westminster and Deputy Chief Brad Wilson was at home, washing his car when they received major-event notifications. Looking at the dispatch information on his phone, Copeland knew immediately what the call was. Driving back into Delta over the Alex Fraser Bridge, Copeland had a clear view of the towering plume of smoke. The officer on the first-arriving company initiated the fire-management plan and quickly escalated the response to a second alarm for Delta; Metro Vancouver was en route with its wildland crews and BC Wildfire crews were being dispatched from Squamish and Hope. Two large air tankers (Convair 580) were dispatched from Kamloops along with four amphibious Air Tractor water bombers from the base in Abbotsford.

Once the second alarm had been called, Deputy Chief Wilson instructed dispatch (E-COMM) that Delta was no longer available for medical calls and to alert Richmond, New Westminster and Surrey for standby. He then went to Hall 1 to initially set up the Department Operations Centre (DOC), while Chief Copeland went to Boundary Bay Airport, where a helicopter would take him up for a recon of the scene. By the time Wilson had arrived at Hall 1, “all hell had broken loose” in Chief Copeland’s words: the wind had changed direction and were gusting up to 60 kilometres per hour; there was a firefighter mayday on the fire line; the guy lines to one of the radio towers were damaged, threatening to bring the tower crashing down; and, driven by the wind, the fire jumped Highway 17 and was threatening Tilbury Industrial Park (home to more than 300 businesses), forcing Delta crews to shift from the bog fire into structural-protection mode while waiting for the Metro and BC Wildfire crews to arrive.

The Conair tankers arrived from Kamloops and made two initial retardant drops, reloadd at Abbotsford, and returned and made two more drops to establish a containment zone. The four Air Tractors were skimming water from the Fraser River and dropping it on the fire, along with several helicopters that were conducting bucketing operations. Wilson moved quickly from Hall 1 to the nearby Delta city hall as the emergency operations centre (EOC) was activated, drawing in support from other city departments and external agencies.

Once the EOC was set up, the mayor declared a state of local emergency to give firefighters every possible resource. The specific powers invoked included the right to enter onto and cross private property to fight the fire and, in this case, to set up a unified command post; to control or prohibit travel which, in this case, meant the closure of Highway 17; issuance of an evacuation order for Tilbury Island Industrial Park; and the right to enter buildings without a warrant. BC Hydro shut down the power to the entire industrial park.

As evening approached, the fire was still described as advancing and covered an area estimated of between 55 and 70 hectares. Delta Fire had four teams working in the industrial park to protect businesses and critical infrastructure. At the peak, there were 100 firefighters from Delta, BC Wildfire Service and Metro Vancouver actively fighting the fire. The earlier firefighter mayday resulted in one Delta firefighter being hospitalized for a pre-existing medical condition. Chief Copeland describes that first night as an opportunity to bring to order all the organized chaos and confusion. That evening at the command post, decisions were made for day 2. Copeland and Jim Richardson, forest protection officer with BC Wildfire formed joint command (rather than unified command) as incident commanders. Deputy Chief Guy McKintuck and his counterpart from BC Wildfire took over operations and responsibility for each day’s incident action plan.

By day 3, BC Wildfire had achieved its goal, which was to stop the advance of the fire or, achieve a black line. BC Wildfire’s initial plan called for its firefighters to be withdrawn at this point, but after an early start to the wildfire season, there were no significant fires elsewhere in the province. Asked by Richardson what his goal was, Chief Copeland replied “total extinguishment,” to which Richardson replied after a pause, “maybe by September.” With the containment line established, an agreement was made with BC Wildfire that its crews would work to extinguishment alongside Metro Vancouver and Delta Fire. Each agency committed about 20 front-line staff; with command personnel, the total on scene rose to 70 or so for the duration.

For Delta crews, working side by side with BC Wildfire firefighters was a learning opportunity. Copeland describes the crews as working as one, though certain tasks were left to those with the specialized training. “A great mentoring opportunity for our people – watch and work with the provincial firefighters, see how quickly they not only deploy, but how they wrap up,” Copeland said.

The fire was fully contained on July 11, having burned 78 hectares. Fire crews were demobilized and the responsibility for the scene reverted to Metro Vancouver Parks staff for monitoring. This fire was unusual in that it started early in the summer, when the water table was still high. Historically, fires start in September after a long, dry spell when the water table is low and vegetation dried out. While the fire did originate near one of the radio transmitter sites, the actual cause of the fire could not be determined.

■ afterthoughts
That the fire started on a holiday was both good and bad: when the evacuation order was issued for Tilbury Industrial Park, there were few people in the area and it was simply a matter of police restricting access; but the holiday also made it difficult to contact property references for some buildings initially threatened by the fire. The property directly in the path of the fire was a large lumberyard.

“We knew what we had in terms of fire loading for that property,” Copeland said, “but we had trouble getting a reference for the chemical company next door to tell us exactly what they had on site and in what quantities.”

As a protected conservancy area, there are strict protocols regarding what materials can be applied from the air and the ground. The retardant dropped by the air tankers had to be approved in advance. Other than initial attack, the water used to fight the fire must come from the Fraser River, the bog itself or in this case, from a neighbouring cranberry bog. Hydrant water is not permitted. Water taken from the Fraser River by the Air Tractor water bombers had to be taken upriver from the salt wedge, the point at which the salinity of the water renders it unusable for agricultural purposes. The salt wedge fluctuates throughout the year, as the outflow of the river changes with the seasons.

Air tankers, water bombers and helicopters attacking the fire on the first day required a NOTAM (Notice to airmen), which was arranged through NAV Canada at Boundary Bay Airport (which is owned by the Corporation of Delta) to restrict air traffic over the fire site, and marine traffic on the Fraser River required similar control for the skimming aircraft to operate safely.

The established and ongoing relationship among the three agencies – Delta, Metro Vancouver and BC Wildfire – made for a smooth working relationship. The command post was established close to the action. Delta rented two motor homes and set them up in concert with its fire command vehicle, which provided radio communication. Metro Vancouver brought a mobile command trailer and then its GIS people communicated with Delta’s Engineering department through the EOC to do the mapping for the site.

The closing of a major arterial highway such as Highway17 creates issues across the entire region. Highway 17 is the major connector between Highway 1, the Trans-Canada, and the BC Ferries terminal at Tsawwassen that serves Vancouver Island, as well as the designated truck route to and from the Roberts Bank Super Port. The highway was closed for three days to allow fire crews to use the road unimpeded.

There were two other significant events on the afternoon of July 3 to which Delta Fire responded – a barn fire that required three units and a battalion chief and, as that incident winding down, a serious highway crash out toward the BC Ferries terminal. Chief Copeland credited a strong working arrangement with surrounding municipalities that resulted in Richmond filling Hall 1, Surrey in Hall 3 and New Westminster covering Annacis Island through the end of the first day. Fortunately, there were no other serious incidents over this time.

Copeland says that while there were minor hitches, overall the response was a success and his goal of extinguishment within eight days was achieved.

“We have a plan, which is vital . . . we exercise it, we update it and our crews are made familiar with it. The first officer in opened the book and followed the procedure. He was very organized, as was our battalion chief on site. Our model on bog fires is to hit hard and hit fast. It worked, and fortunately, we had the resources.”