We are days away from the 2016 Firefighter Career Expo (register here), happening this year at the Garry W. Morden Centre in Mississauga, Ont., on Saturday, Feb. 27. Here's an idea of what participants learned at last year's fall expo in Toronto.


Sept. 28, 2015, Toronto – Nailing the interview is crucial for job seekers in almost all fields, and for the highly competitive fire service, perhaps even more so.

That might explain why there was no shortage of hands shooting up to participate in a mock-interviews session during the 2015 fall Firefighter Career Expo, held yesterday at the Fire and Emergency Services Training Institute (FESTI) in Toronto.

Shawn Cooligan and Dave Gillespie from firefighterinterviews.com facilitated the expo's highly anticipated live interviews. Four volunteers were chosen from the audience to each tackle an oft-asked interview question.

"I was actually surprised," Cooligan said about the level of participation. "It's pretty intimidating because there are 70 or 80 people in the audience and they're all kind of looking down at you and you're down on the interview table."

To enhance the realism of the exercise, Toronto Pearson Fire and Emergency Services deputy chiefs Dave Lane and Todd Aitken, as well as Chris Peterson from Brampton Fire Emergency Services, acted as an interview panel.

After each question, all three interviewers and the facilitators gave advice as to what each interviewee did right and on what he or she could improve.

"When they're looking at hiring a firefighter, 99.9 per cent of the job is your character," Cooligan said. "Integrity, honesty, loyalty, respect . . . a lot of those things can be watched when you come in the room in your body language."

Making a good impression was also brought up in the chiefs speak out expo session, led by Lane, Aitken and Peterson, to share what departments look for in recruits. First impressions are lasting, they all agreed, so look and act as though you already are a firefighter.

Another highlight of the expo was Ontario Association of Fire Chiefs executive director Richard Boyes, who supplied an overview of the province's Candidate Testing Service (CTS). The association launched CTS in April 2014 and so far 14 municipalities have adopted the standardized system.

Boyes stressed that with standardized testing, municipalities already know that a candidate has the necessary firefighter skills so more emphasis is placed on the resume and interview.

"Now the municipality wants to know what else you're bringing to the table so that's why your resume comes in," he said. After the resume is considered, the next step is the interview.

"In [the CTS] process, they know you're a good firefighter, you've demonstrated the skills, now they want to know: Do you fit? Can you get along?"

See our Facebook page for photos from the Firefighter Career Expo. 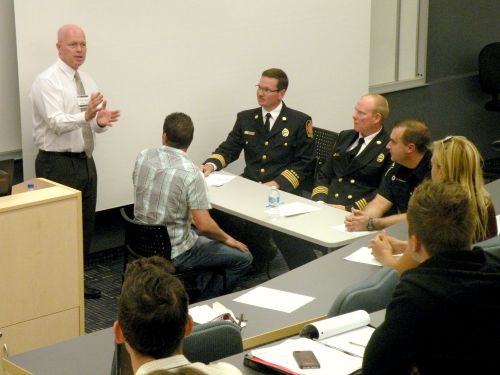