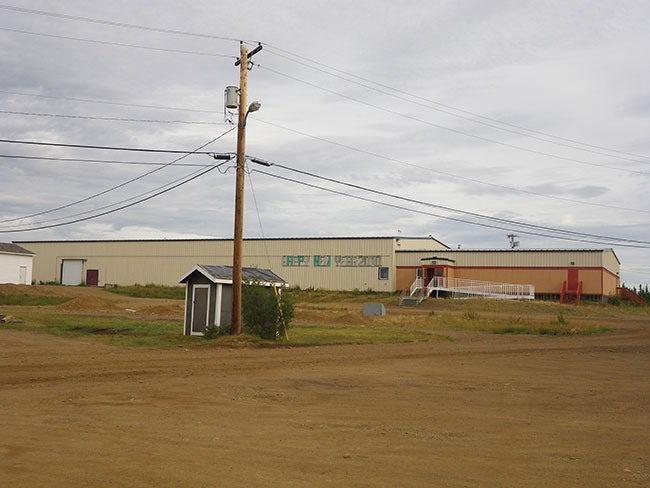 The Jimmy Vital Arena in the summer. all photos: Kirk Hughes

A bitterly cold Jan. 5, 2010, began like most of the past several weeks in Deline, N.W.T., and had started with a blast of heavy precipitation blowing off the nearby Great Bear Lake, adding humidity to the already staggering temperatures pushing down from the Arctic Circle that forced the temperature to read close to -50 C. This type of frigid weather is nothing new for this small community located in one of Canada’s remote northern areas, but the weather would play a critical role in the coming hours as a major landmark in the hamlet caught fire.

Preparing for fires in cold weather has been something rehearsed in countless fire stations across the country; it’s no surprise that Canadian firefighters are often faced with this difficult task during winter months – the joy of living above the 49th parallel. What makes this fire different wasn’t so much the low temperatures, but rather the pre-work that had gone into being prepared to deal with this precise scenario, and putting into place what had been, for months, painfully practiced.

Deline (pronounced del-a-naw) is a First Nation chartered community located on the west shores of Great Bear Lake, just west of the mighty MacKenzie River. With roughly 500 inhabitants, the remote settlement is a “fly-in” community, which means it’s only accessible by aircraft for most of the year. The residents of Deline are mostly Dene and Metis, with some “southerners” working in the school, nursing station and RCMP. A very involved place, residents often gather at local community centres to play hand games, drum, dance and socialize. One of those community gathering places is the hockey arena and youth centre, located adjacent to the school named the Jimmy Vital Arena after a former Chief. The arena contained key pieces of recreation for the community, including an ice pad, change rooms, concession stand and a small meeting room that hosted after-school activities.

The Deline Fire Department had gone through a period of rejuvenation with help from the local Band Office who contributed funding for training and equipment. With the assistance of the Office of the Fire Marshall, the Deline Fire Department boasted a healthy volunteer core of 25 plus firefighters and one apparatus, a strong program for the region. One of the items discussed was the availability of the fire department to handle a major fire, since no mutual aid existed, and the funds needed to replace even modest structures would incur significant cost while reducing infrastructure capacity. With that in mind, the fire department trained steadily in preparation for that exact scenario. Some of the steps used during the Jan. 5 fire are still studied today as a guide on how to properly work a large fire in such hostile conditions.

Pre-planning was significant. Trucks were outfitted with heating pads to prevent freeze-up, maintenance was extended to ensuring fittings were lined with anti-freeze and even bunker gear was modified internally to allow for heat retention without affecting breathability. Drills had been conducted to train firefighters on the skillsets needed to move water quickly to avoid slushing up pumps and push water in such a way as to avoid line freeze. Crews practiced scene set-up to minimize exposure time for things such as hose advances and search operations.

As the sun peaked above the horizon early in the afternoon, shining a small amount of light on to the community, a worker at the hockey arena was preparing to open-up for the after-school programs. As he shuffled boxes into the concession kitchen area, he inadvertently knocked the dial on the stove top counter. Placing the boxes near the stove to begin prepping food, he went back outside to gather more boxes but got side tracked speaking to another employee. A short time later, a light haze of smoke was noticed. A rink employee, working at the other end of the arena, walked into the foray to retrieve a mop when he noticed the smell of fire and pulled the alarm.

As the siren blared across the hamlet, firefighters reacted quickly and began to assemble at the hall. As the lone fire apparatus pulled out of the station, a black column of smoke was visible all through town. Arriving on-scene in a separate vehicle, the assistant fire chief observed heavy smoke conditions and visible flames inside the foray. He ordered a primary search while radioing the responding engine to prepare to pack up and stretch a hose line. Arriving moments later, the attack team made entry and managed to locate the seat of the fire. An interesting fact emerged: due to a recent fire prevention program, a fusible link on a roll-door had dropped, containing the fire to one room. A second team made entry and performed a primary search. Even though the employees indicated no one should be inside, given the time of day, it was decided to guarantee the arena was empty. A Rapid Intervention Team (RIT) was established and a water shuttle, using water tankers, was skillfully established. In the end, the fire caused minimal damage to the structure. Although many factors existed that contributed to the overall success of the operation, a few key points stood out during the post-incident briefing:

Anytime a focal point in a community catches fire, the residents hold their collective breaths, hoping that the fire doesn’t destroy a building that could take years to rebuild. That reaction is universally accepted. What made the Jan. 5 Jimmy Vital Arena fire so different wasn’t the typical fire related preparations, but rather the innovation and forethought from the entire community. As they practiced, they discovered deficiencies, like water freezing in the porta-tank, then implemented a truly northern solution to deal with it. They realized that darkness and cold would be negative factors, so they went about mitigating them. As a case study, it showcases that when preparing for adverse conditions, learning lessons from training, implementing out of the box thinking and understanding the harsh working environment can aid in delivering when it counts and achieving amazing results.

Kirk Hughes is the director of protective services for the County of Vermilion River, Alta., having served with the Deline First Nation during his time in the RCMP. He can be reached at khughes@county24.com.

Related
Use data to drive decision-making
Volunteer Vision: The year that was, the year that will be
Sub-1001 fire fighting
TechTalk: Dedicated fire truck repair facilities