In September 2014, children in a Regina neighbourhood started hearing stories about kids setting garbage containers and garages on fire and that some of these fires were set using gasoline. While kids setting garbage fires is common in the neighbourhood – an average of 100 garbage fires are set by kids every year – this was different. Kids using gasoline was different and indicated fire setting behaviour was at a new, dangerous level. 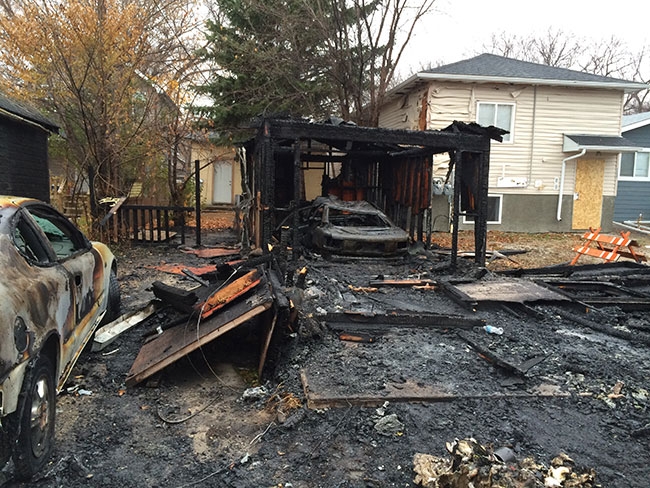 rson behaviour in children may be commonly associated with incidents like setting fires in garbage cans Read Part 1 of a series exploring how Regina Fire & Protective Services managed an escalating problem with children setting fires in the city's North Central neighbourhood.

■ A family narrowly escapes
On April 24, 2015, firefighters responded to a house fire in Regina’s North Central neighbourhood. It was 10:30 p.m. A family with young children escaped with the help of an older brother, who happened to be walking home at the time of the fire and noticed the flames at the front of the house. He ran in, alerted the family, and helped the younger children escape to safety through the flames and out the front door. They said they could feel the intense heat as they ran to safety. The youngest child to escape was an infant. Once safely on the sidewalk, the father looked back and saw the flames burning up along the siding of the house and up to the roof. The fire was spreading extremely fast.

Despite arriving on scene within five minutes of a neighbour’s 911 call reporting the fire and concentrated fire fighting operations, the two-bedroom bungalow sustained heavy fire, heat and smoke damage. The home was completely destroyed – the family could not return. The fire also damaged the neighbouring home to the south. The fire investigator determined this fire was deliberately set under the front stairs to the home. This fire marked the culmination of escalating fire setting in the community by children and youth, which started six months earlier in October 2014.

■ How it started
Over the noon hour on Oct. 1, 2014, the department responded to a fire in a vacant home. The family living in the home had moved out the previous day. A witness saw children running from the home just before the fire, and provided the fire investigator with descriptions.

The fire investigator determined the fire was deliberate. Papers had been piled onto the stovetop in the kitchen, and the stove burners had been turned on.

Knowing his public education colleagues at the fire department had built strong relationships with principals in the neighbourhood schools, the fire investigator approached his colleagues to help him track down the children seen running from the home. Together, they approached the principals at the two schools located closest to the fire.

The principals provided immediate assistance in attempting to identify the children. One principal, who was new to the school, could not identify any of his students as matching the descriptions. At the second school the principal brought several students into the office to speak individually with the fire investigator and educator. Although they fit the witness descriptions, they did not set the fire in the house. The students began to tell alarming stories – stories of two children in particular who were setting garbage and garage fires, sometimes with gasoline. Although the children had no warning they would be called into the principal’s office, their stories were remarkable in that they were detailed, and they were consistent.

The two boys named by the other children weren’t in school that day, or the rest of the week.

On the evening of Oct. 3, 2014, a Regina police officer apprehended a group of six boys who were walking through the neighborhood playing with lighters. He took the lighters from the boys and talked to them about the dangers of lighters and starting fires. One father told the officer he had been having problems with his two sons starting fires. The mother of two other boys also said she had been having problems with her sons lighting papers and other items on fire. The boys identified two days earlier as setting fires with gasoline were part of this group.

■ Initial intervention attempts
On Monday, the fire educator, the fire investigator and the police officer’s partner met with the principal and three of the boys apprehended on Friday evening, including the two named by the students the previous week. They talked about the consequences of using lighters and setting fires, and the extreme danger of using gasoline. The eldest boy admitted to setting fires using gasoline with his brother.

As a result of that admission the principal called a case conference for the boy and his brother, along with their mother, the police school resource officer, the community school coordinator, a social services child protection worker and a family preservation therapist. The fire setting was extremely dangerous, and both the principal and fire and police officials were very concerned for the safety of both the boys and other children in the community. The case conference for the brothers was held in late October, and focused on the brothers’ lack of school attendance, and other behaviors, including the fire setting. At the end of the meeting the boys’ mother decided to move the children to another school, which she did the next day.

In the meantime, the principal from the school first visited by the fire investigator and educator called, and reported that one of his students did, indeed, match the witness descriptions from the house fire on Oct. 1. That boy was also one of the six apprehended by the police officer the evening of Oct. 3.

The fire investigator, along with the educator and a police officer met with the principal and the student, who admitted to setting the house fire with two other boys, both known to fire education officials as fire setters.

■ Escalation
On Oct. 27, just after 2:00 a.m., the fire department responded to two fires in the community just four blocks apart. They found six garbage and recycling bins that had been lit on fire (which completely destroyed a garage and two cars), and damaged the house, a neighbouring garage and overhead power lines. Eight minutes later firefighters responded to another fire set in garbage and recycling bins, this time destroying a shed.

On Nov. 3 — again in the early morning, this time at 3:44 a.m. — firefighters once again responded to garbage bins set on fire, completely destroying a garage and its contents.

Three days later two students reported to their principal that the boy who admitted to using gasoline said he had burnt down a garage.
They told their principal that although the brothers are grounded, they sneak out late at night and call on a third boy. The three boys wander the neighborhood lighting fires.

Throughout the winter (as is typical in the bitter cold of the Prairies), there were no further garage or structure fires started by fire spreading from garbage or recycling bins set on fire. There was also no further information from students about fires being set by kids, in particular the two brothers and the third boy. But this was not the end.

Angela Prawzick is a public education officer for Regina Fire & Protective Services. She has been with the department for 23 years, where she works closely with community partners to develop targeted educational strategies and programs. Candace Giblett has worked as a public education officer with Regina Fire & Protective Services for 14 years. She is responsible for the design and development of fire and life safety education programs..