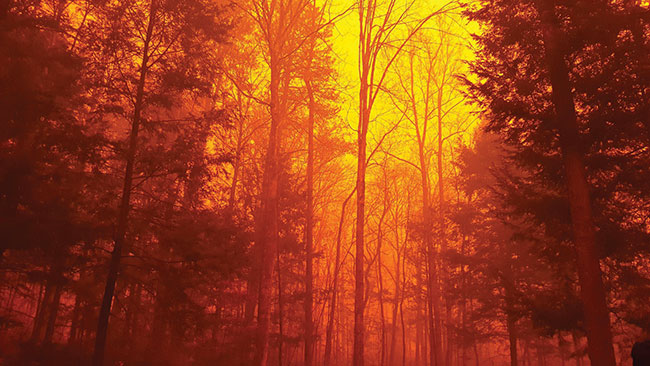 An unsuspecting Tennessee community found itself in a terrible place during the 2016 Chimney Tops 2 Fire, which led to 14 deaths and nearly 200 injuries — many related to last-minute evacuations.

To understand what motivates people to evacuate, researchers at the National Institute of Standards and Technology (NIST) surveyed affected residents. Their analysis of the responses identified key factors at play and uncovered an unexpected phenomenon, wherein smoke appeared to lower peoples’ sense of danger. These results, outlined in the International Journal of Wildland Fire, could help communities, especially those without robust wildfire response plans in place, devise and improve strategies for getting people to head for safer ground.

The NIST survey asked residents of Sevier County, Tenn., the county most impacted by the fire, about a multitude of factors that could have affected their decision to flee or stay behind.

Receiving almost 400 responses, the survey revealed that nearly 80 per cent of evacuations occurred on the day the fire had breached the city limits, despite the fire burning for days prior in the nearby Great Smoky Mountains National Park. In addition, less than a quarter of surveyed residents received any type of warning or had prepared an evacuation plan for their household.

“While wildland fires can occur fairly regularly during fire season, only a small percentage actually spread into communities. So, the local public wasn’t necessarily prepared,” said Emily Walpole, a NIST social scientist and co-author of the study.

The team used statistical approaches to determine how much influence the factors from the survey had on each resident’s sense of danger to themselves or others and on their evacuation decision.

The analysis revealed that witnessing flames or embers increased perceptions of risk — a somewhat expected outcome, Walpole said. Seeing or smelling smoke appeared to have the opposite effect, however, lowering residents’ sense of danger. According to the authors, the seemingly bewildering finding could be explained by the wildfire’s longevity.

“Since this wildfire was actually burning for a week in the surrounding area, we proposed that some kind of desensitization might have happened,” Walpole said. “It’s possible that you get used to smelling smoke and it basically lulls you into a false sense of security … the fire could be miles away and be producing smoke.”

Whether one’s sense of security was false or not, it emerged as the most critical factor for evacuation decisions. By asking residents to rank their perceived risk on a scale of one to five, the researchers found that the likelihood of evacuation increased by 3.5 times with each increasing point on the scale.

Gender also had a powerful effect, as women were almost three times more likely to evacuate than men. Studies of other extreme events, such as hurricanes, have suggested that this outcome could be in part because women are more likely to take on caregiving roles, Walpole said.

The effects of household preparedness were split. Those that took measures to make their residence more fire-safe — clearing vegetation around the house, installing more fire-resistant roofing, etc. — were more than twice as likely to stick around, as they may have felt more secure at home. However, having an evacuation plan, which could make evacuating a more approachable option, made households about twice as likely to clear out.

The survey also probed residents about the warnings they received from sources they deemed credible which, for most, were official sources, including fire and police departments. The researchers uncovered that hearing from a trusted source increased the odds of evacuating by a factor of almost 5.5. However, the fraction of surveyed residents that received trusted warnings or any warnings at all was low, at 7.4 per cent and 22.7 per cent, respectively, which could partially explain the prevalence of last-minute evacuations.

“It seemed that people expected that if a large wildfire requiring evacuation was going to happen, they would be told. Instead many had to find out on their own,” Walpole said.

In particular, the authors call out the essential nature of early warnings with clear messages, accurately representing the threat of oncoming wildfires.

Jonathan Griffin is a science writer and public affairs specialist with the NIST Public Affairs Office.