The Ontario Association of Fire Chiefs annual conference and trade show was held at the International Centre in Mississauga, Ont., in May. 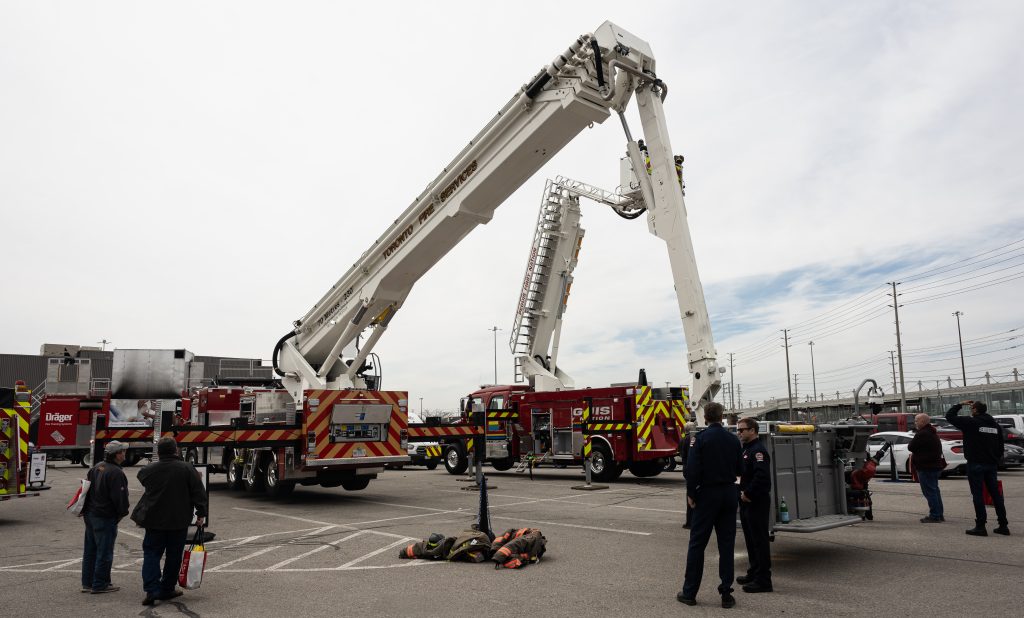 The Ontario Association of Fire Chiefs Conference and Trade show was full of festive spirit as chiefs across the province and beyond enjoyed the opportunity to gather in person again. Almost 3,000 attendees and over 200 exhibitors convened at the International Centre in Mississauga for the event, which ran from May 5 to 7.

“It was great to return to in-person events and the OAFC was pleased to host so many people attending our educational sessions, memorial service, banquet, networking events and trade show. Our relationship with our members, vendors and partners are so key, and the opportunity to see people come back together was incredible. We are already looking forward to our 2023 event!” said Deputy Chief Rob Grimwood, president of the OAFC.

The OAFC show kicked off with a packed room for an opening session on mental health, followed by keynote speaker Michael Landsberg. Landsberg founded, with others, the charitable foundation Sick Not Weak after realizing he could inspire people by sharing his own story of battling severe depression.

Landsberg spoke to a rapt room about his personal story, sharing many emotional messages along the way. Landsberg described depression as the inability to feel joy, along with a loss of self-esteem that robs you of confidence. His message was clear: If you have depression and anxiety, know that you are not alone. Several fire chiefs in the room showed the vulnerability he acknowledged is necessary in leadership by acknowledging their own struggles with mental health. Although strides have been made, Landsberg said there is still a stigma around mental illness and acknowledging the stigma is the “best way to beat the stigma.” He stressed that it’s prudent to admit you don’t understand depression if you don’t have it when speaking with someone who does, and to not give up on a person with mental illness.

In another emotionally moving presentation, Bob Ferguson, a firefighter in Uxbridge, Ont., shared his story of operational stress injury after responding to a motor vehicle accident call in which his best friend ended up losing his life. Many firefighters in small towns know the fear and reality of responding to calls involving people they are close to or know well by proximity, and what it is to have to attend both the call and the funeral. In the aftermath of his best friend’s death, Ferguson was diagnosed with cumulative PTSD. Ferguson’s illness had many physical and mental ramifications, including four months of life spent completely agoraphobic. Ferguson courageous story walked the audience through the realities of his injuries and the steps he took to move forward and heal.

The conference program took a tactical turn with “Reading Smoke” by Philip Jose of Ignition Point Training. The key and repeated message of that presentation? Smoke IS fuel! Jose shared several images in an interactive exercise in reading smoke in terms of density, velocity, volume, and colour, and in turn, assessing where the seat of the fire is. In determining this, he said density equals destiny — that’s where the fire is going.

The first day also featured an interactive afternoon “So you want to be a fire chief? Everything you need to know, should have known or could have known” panel. This was a very successful session that the OAFC said it plans to build on for future events. There were also sessions on data analytics for program evaluation and developing a community risk assessment that afternoon.

The second day garnered another room at full attention with a keynote by Celina Caesar-Chavannes, a former MP with the Canadian government who now serves as the senior advisor of equity, diversity, inclusion initiatives and adjunct lecturer at Queen’s University. She shared insights from her personal journey and brought her passion for transformative leadership through design thinking, building trust, mindfulness, and empathy. One of the most poignant parts of her presentation came in showing a picture of a child left out by a group of other children, and in doing so she challenged and reminded the audience that nobody wants to feel left out — that’s what inclusion is really about. Her DEI talk was less about statistics on why diversity is good for an organization, and more on why being empathetic humans to each other is at the heart of why DEI is so important.

Toronto’s Fire Chief Matthew Pegg followed Caesar-Chavannes talk with an insider’s look at his life quarantined in a hotel during the apex of his time as incident commander for Toronto’s COVID-19 response. He shared his personal notes, remarking on the anchors of routine during such isolation, the amazing behind-the-scenes teams he was grateful for, and ultimately the way in which he will be forever changed by the experience. 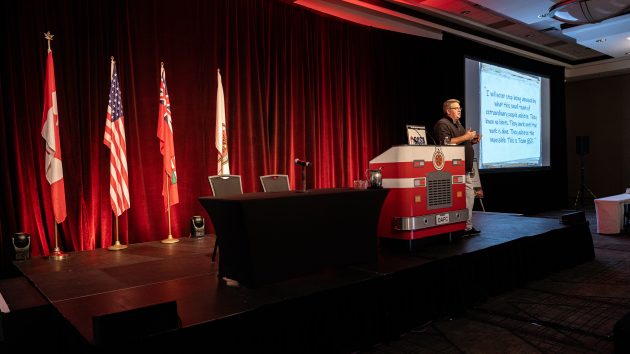 The trade show opened after Pegg’s talk, and concurrent conference programming included an update from the Office of the Fire Marshal (OFM), a toolkit for including women in the fire service from Fire Service Women Ontario, and sessions on enhancing your community presence digitally, and creating a peer support program.

The last day of the conference featured a keynote by Richard Gaseway on situational awareness, a panel on developing an E&R bylaw, and more time to enjoy the trade show.

Outside, Toronto Fire Services showcased their new aerial apparatus platform, which is the tallest in North America. The Bronto Skylift 70 metre articulated aerial unit is nicknamed “Tower 1” and can reach about 22 storeys high at full extension. Toronto’s next tallest aerial apparatus can reach 11 storeys.

In the outdoor display area, The Office of the Fire Marshal was hosting tours of one of Ontario’s new mobile live fire training units (MLFTUs). The unit is one of two roaming the province, and at the time of the OAFC trade show, the units had already put 2000 firefighters through training this year.

The new mobile training units are part of the province’s plan to expand and modernize access to firefighting training with the intent of bringing additional high-quality, hands-on training directly to fire services in all regions.

The unit, built by Dräger, has multiple areas to accommodate a variety of training scenarios. The unit is modular and can be reconfigured. At the trade show, one section was set up as a kitchen fire that produces artificial smoke Propane props are designed to be easy to reset. The interior can be hosed down to clean. There are standpipe connections, a sprinkler, and a couch to simulate a living room. The unit is made to deliver pre-flashover conditions and departments can also train to a basement fire scenario. The third fire prop area is upstairs, where firefighters train on laddering the second story window. There is also a roof prep that was added to train ventilation. The fire simulation firefighter training meets the job performance requirements outlined in National Fire Protection Association (NFPA) training standards.

“These units promise to deliver realistic training to ensure that the men and women of the fire service are prepared to respond to calls for service…and the MLFTU allows them to train for an emergency as realistically as possible,” said Jon Pegg, Ontario Fire Marshal, in a statement.

Two operators are always needed during training, with one occupying a command centre that is cordoned off from the rest of the unit. Inside the command centre is a button that will shut everything down in case of emergency. There are also cameras showing each area of the unit and safety monitoring functions as well.

The mobile unit stays on location for one week and ideally will draw more than one department in the region for training while it is there. There is no cost to train in the unit, and the OFM is looking to rotate it through regions in a way that is mapped out logically. The units are currently booked for the 2022 season and questions about applications can be directed to AskOFC@Ontario.ca.

The OFM will be using the trailer later this year at the OAFC’s FireCon, Sept. 8-10, in Thunder Bay, for a train the trainer program.  For more information visit firecon.ca.

With plenty of education, networking, purchasing and sights to see, the 2022 show’s return to in-person was a great success. The OAFC Conference and Trade Show will return May 4-6, 2023, at the International Centre in Mississauga. More on the 2023 show will be available from the OAFC soon.