Examining the importance of a trained Rapid Intervention Team (RIT) 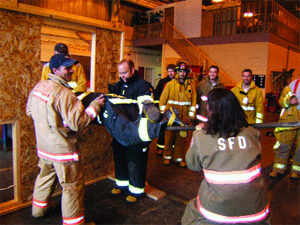 Firefighters are called to numerous fires and other emergencies every year. The extent of risk to firefighters is related to a number of factors, including how often they are exposed to working fires, the training and equipment they bring to the task, staffing levels, building construction and the exact nature of the fire itself.  Working in teams, response professionals usually accomplish their mission safely.  But sometimes a sudden, unexpected event occurs: a firefighter is trapped in debris, suffers an injury, or is reported missing. If such an event occurs, the Rapid Intervention Team (RIT) is responsible for bringing the downed crew member to safety.

PHOTO BY JAMES HALEY
Firefighters use a pike pole to slide a “downed” firefighter through a window prop during the practical portion of a RIT training course offered last September at the N.B. Fire Services Workshop.

Specialized rescue
The Rapid Intervention Team is a unit made up of firefighters trained in emergency scene rescue techniques. The team's objective is to rescue fellow responders who become trapped, injured or missing during response activities. RIT members do not have other assignments during the incident that could divert their focus from the potential rescue of firefighters in distress. The RIT team officer reports directly to the Incident Commander (IC), therefore, he or she should be within verbal contact with the IC. The team should also be monitoring communications so if needed, they will have a better understanding of what is going on and the type of rescue they will have to perform.

Meet the standard
Fire departments should use RIT at all structure fires without exception. Both the NFPA and OSHA identify the requirement for some type of RIT at structural fires. These standards require that a minimum of two firefighters per team be standing by outside the entry point in full protective equipment and with any specialized rescue equipment that might be required given the specifics of the operation underway. If a RIT team is deployed to provide rescue of a firefighter, the incident commander shall assign an additional RIT as a back-up for the team that was deployed.

Fire departments should ensure that the department's Standard Operating Procedures or Guidelines (SOPs/SOGs) are in place and refresher training is provided. Written SOPs are only effective if they are enforced by management and used by firefighters. Training should stress an attitude of safety in responding to all incidents combined with specifics on the art of firefighter rescue. When fire departments develop and train members that may be assigned to a RIT, they are taking an important step in improving firefighter safety on the fireground or at other emergency incidents.

All need RIT training
Firefighters are accustomed to responding to calls from the public, but they are not always prepared to respond to calls for help from fellow firefighters. It's important to note that not every firefighter will be assigned to a RIT, but all members of the fire department should be instructed on the purpose, policies and rules governing a RIT and the conditions under which it would be deployed. When a Mayday is declared on the fireground, it is too late to start making up a rapid intervention team. These life-saving crews must be trained, equipped, and ready to respond to a Mayday call instantly. A fellow firefighter's life may depend on it!

André Bouchard is a volunteer Assistant Team Leader with the Oromocto (N.B.) Fire Department and a member of its Rapid Intervention Team. He has been with the department for six years and is a serving member of the Canadian Armed Forces.