It was a Friday afternoon in September – the 21st to be exact. Kim Ayotte, fire chief of Ottawa Fire Services, was relaxing at his cottage in the Otter Lake area, just over an hour’s drive from the capital. 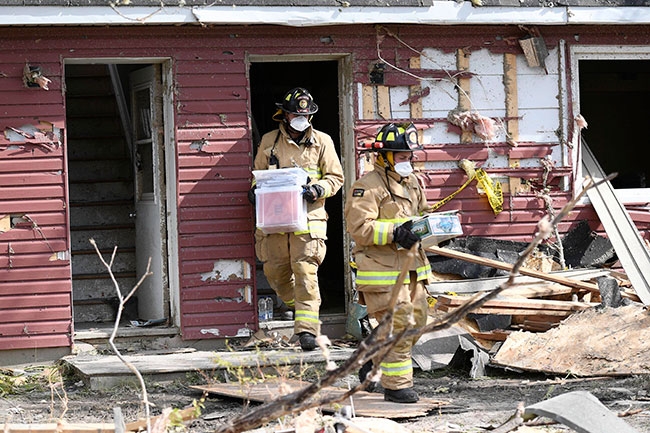 Ottawa firefighters Eric Graf from fire station 46 (back) and Ash Weaver from fire station 63 carry out personal items from a home damaged by a tornado in Dunrobin Ottawa Fire Services Chief Kim Ayotte recalls the response of the fire service and other first responders to six tornadoes that touched down in the Ottawa/Gatineau area last September. By Grant Cameron.

A few weeks earlier, he’d been confirmed as fire chief. He’d been interim chief before that and was taking a well-deserved break.

That day felt different, he recalls. It was extremely hot and humid, so much so that condensation had formed on the walls of his garage.

“It was kind of an eerie feeling,” he says. “The temperatures had started to rise and the humidity levels were over the top.”

Earlier, a tornado watch had been issued by Environment Canada for Gatineau and a wide swath of Eastern Ontario, including Ottawa.

Just before 5 p.m., the situation took a turn for the worse.

Ayotte received a call to inform him that a tornado had touched down in the area. He began monitoring the situation. Meantime, he jumped in his vehicle and drove back to Ottawa. It took 45 minutes.

By the time it was over, six twisters had struck the Ottawa-Gatineau area, reaching gusts up to 265 kilometre per hour and causing severe damage and power outages across the region.

EF-3 tornadoes tore through the rural Ottawa neighbourhoods of Kinburn and Dunrobin before moving on to Gatineau, an EF-2 tornado struck the Arlington Woods and Greenboro neighbourhoods, and an EF-1 tornado hit the Calabogie area.

Ayotte recounted the experience in a presentation at the 2018 annual general meeting of the Ontario Association of Fire Chiefs (OAFC) and in an interview afterwards with Fire Fighting in Canada.

“We were extremely lucky in Ottawa in that there weren’t any fatalities,” he says, “so if there’s any good news out of this, a lot of people got affected, but at the end of the day we had a great response, great community involvement and a great response from emergency management.”

Responders followed the Incident Command System that goes into effect when a disaster of such magnitude occurs.

“Once we get calls to these types of situations, we establish a command presence and then we co-ordinate the responses and do systematic searches of all the buildings to ensure that anybody who requires immediate attention, people who are injured, etcetera, are assessed and treated through our paramedic partners and transported, if needed, to hospital, and then we do more in-depth searches,” says Ayotte.

“My job, when I responded back to Ottawa, was to go to each of the command sites, see how they were doing, look at the setup and the resources and make sure they were operating in accordance with how we expect them to operate, and they all were, and then I moved on to the Arlington Woods area.”

Upon his arrival in Ottawa, Ayotte was briefed and spoke with Mayor Jim Watson.

Responders set up in community centres where people registered with the fire department. If somebody was missing, firefighters went out to search the properties.

For the most part, he says, the response went according to plan.

“There’s always a few gaps here and there, but from an overall perspective the emergency response was great. We had great resources. The community felt secure.

“When people saw teams of firefighters walking up and down the streets and checking houses they kept telling us that they were reassured that someone was there.”

The biggest challenge facing first responders was the number of tornadoes that hit the area, says Ayotte.

“It was one storm system, but several touchdowns. There was a total of six tornadoes in effect. The challenge was that it draws a lot more of our resources to each of those locations.”

The region was still experiencing car accidents and fires, he says, so the department still had to have resources available to respond to those incidents.

Ottawa is also a large composite department, he notes, and because one of the areas hit was rural and another was urban, staffing had to be managed properly and firefighters called back to work.

“It all meshed together quite well,” says Ayotte.

During his presentation, the fire chief showed videos and photos of some of the devastation that occurred that day.

But, he admits, they didn’t do the disaster justice.

“It literally looked like a war zone,” he says of the carnage in the Dunrobin and Arlington Woods area.

There were a number of rescues of people from basements. One woman had broken ribs. She had been blown through the house into the basement.

“She was at the bottom when our guys found her,” says Ayotte. “She had trouble breathing and was taken to hospital.”

Dozens of people were injured in the tornadoes, numerous houses and buildings were demolished and damaged, and more than 200,000 people were left without power, but there were no reports of fatalities. Damage was estimated at $195 million on the Ottawa side and $102 million in Gatineau.

Ayotte’s own cottage was in one of the areas hit by a tornado, but it escaped relatively unscathed.

In the aftermath, fire departments in Quebec requested help from the Ottawa department, but Ayotte says for the first time in history Ottawa wasn’t able to respond, as the region was dealing with its own issues and still had to respond to other calls like medical services and were out of resources.

In retrospect, Ayotte says there are a number of lessons that can be learned from the disaster response, one being that fire service leaders at disasters should be prepared for the unexpected and another being that they can gain valuable insight from other professionals at an emergency situation.

In other words, “Don’t underestimate what you don’t know,” he says. “It’s so important to have a presence at the emergency operations centre with partners that can provide insight into a whole bunch of areas that you might not have contemplated originally.

“In a larger group setting there’s better co-ordination and there’s better information exchange and then you can make decisions based on what resources you have and how you can support it.”

As for the overall response effort, Ayotte says he was pleased with the way firefighters and other responders worked together.

“I’m so proud of the City of Ottawa and their response to this. This was one of the easiest responses I’ve ever had in terms of getting everything to fall into place within a reasonable timeframe.”