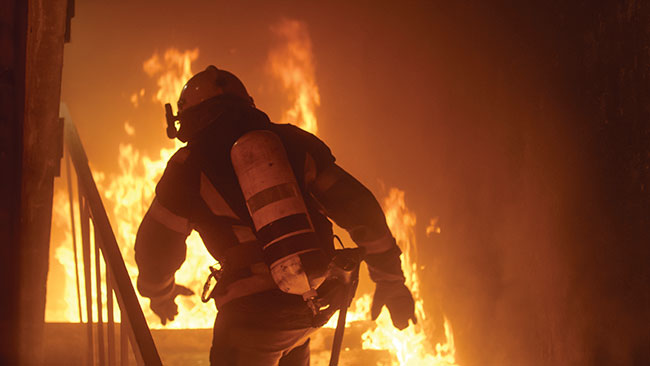 Remember when all hell breaks out on the fire-ground, your members will not rise to the occasion – they will default to their level of training. © Gorodenkoff / Adobe stock

This will be the last part to my mini-series regarding my “influencers”.  And yes, we are still talking about Mayday protocols. I’m aware that some of you may be thinking, “I’ve heard all this before.” But one of our great needs today is to familiarize ourselves with the familiar, to get better acquainted with what we already know.  After all, we are talking about protecting the greatest resource in the Canadian fire service — our firefighters.

With that in mind, let’s try an experiment to see just how familiar your members are with the whole process of calling a Mayday.

At your next practice announce you are having a pop quiz, but don’t reveal the subject. Hand out paper (blank) and pens to each member. The idea here is to see how fast they will clue-in and that the subject is Mayday. Once paper and pens are handed out begin asking the following questions, allowing time for members to write down an answer before proceeding.  This is testing the individual’s knowledge so there should be no interaction.

Wait with reviewing the answers until all the questions have been asked.

Hopefully, as members respond with their answers, a picture will form for you as to just how familiar they are with Mayday protocols.

The following information will for the most part line up with the questions both as answers and background information.

Five simple steps that could save your life
First, push the Emergency Identifier Button (EIB) on the radio. This captures the channel for 20 seconds, gives an open mic to the radio (in other words the firefighter does not need to push the talk button on the radio), and sends an emergency signal to radio communications identifying the radio.

If unable to press the EIB, or if radio not equipped with EIB, go to Step 2.

Third, give the following information LUNAR: L location, U unit number, N name, A assignment (what were you doing?), R resources (what do you need?).

Acronyms are helpful in keeping the important points at the ready in our brains when we are suddenly faced with a crisis. The order here is to give your location first in case you are unable to give further information. Just saying “I need help” does not give the rescuers enough information to find you.  Giving your unit number and assignment will be extremely helpful. And letting the RIT (Rapid Intervention Team) know if you need a certain piece of equipment (ladder, chainsaw, prybar etc.) will expediate the rescue efforts.

The next two steps are very simple but have a huge impact on you being found. Activate your PASS — it will be an audible beacon marking your location. Then, if you are able, set your flashlight up so the beam of light is shining on the ceiling above you. This is just another beacon to help you being found.  Remember the difference between a rescue and a body recovery is time. The sooner you call Mayday, the sooner the RIT can get into action. Inform IC of any actions you take so RIT is updated on all actions taken in your efforts to escape.

Mayday comes from the French term m’aider, an imperative that means “help me.” Mayday was adopted as a distress call by the International Radio Telegraph Convention in 1927. In international radio language, “Mayday, mayday, mayday,” means “Life is in danger. Immediate help needed!”

The sobering truth is that Rapid Intervention is not always that rapid.  And you do know what the letters IDLH stand for, right? Immediately Dangerous to Life and Health.

The following Mayday protocol was put together several years ago in honor of the Charleston 9.  RIP brothers. I submit it to you as a suggested guideline to be added to your existing operational guidelines.

These nine points may be narrowed down to six: Fall, collapse, caught, lost, trapped or activated (PASS/low air).

There are several types of Mayday calls

The IC will request Emergency Radio Traffic Only. Only Mayday personnel, the Incident Commander or the IC’s designee, and the RIT will use this channel.

Consider the following: Among the 272 pages of the NIOSH report regarding the Super Sofa Store Fire were the following lines: “The communications process was not controlled. The Fire Chief, the Assistant Chief, and Battalion Chief 4 were all issuing orders and providing direction independently, using a single overloaded radio channel. Critical messages, including distress message from firefighters inside of the structure, were not heard.”

Analysis of the recorded radio traffic indicates that the deceased members did not attempt to call for assistance until they were in critical distress.  All the recorded messages indicate that the firefighters were lost, disoriented, and either running out of air or already out of air. The firefighters were already in imminent danger, deep inside the building, when they began to call for assistance.

Engineer 5 said the word “Mayday” once and then three minutes later he activated his emergency button on his portable radio.  All the “firefighter in distress” messages came from the radios assigned to the deceased members.

Next comes the RIT Assignment. The Rapid Intervention Team (cew) should already be established, so now the IC or the IC’s designee will assign duties to the RIT and call for any other resources necessary to perform the rescue. If the exact location of the trapped personnel is not known, the RIT should be sent to their last known location.

On PAR after mayday declaration:  Once all units (except the Mayday personnel, the IC or the IC’s designee, and the RIT) have switched to an alternate talk group, Command will conduct a Personal Accountability Report. Divisions/groups that do not report after two attempts will be considered Mayday. If divisions and groups have not been assigned, the PAR will be by individual unit.

Before I close let me leave you with three recommendations and a warning:

A final warning: Firefighters get into trouble because of smoke, going too far into the building, getting disoriented or lost, poor communications, lack of confidence in SCBA emergencies, tunnel vision, and poor training. Remember when all hell breaks out on the fire-ground, your members will not rise to the occasion – they will default to their level of training!

And probably the most overlooked reason why firefighters get into trouble because they are physically unfit. Cardiac emergencies cause 40 per cent or more of on-duty deaths.  Smoke, toxic gases, and the stress of the incident are all contributing factors. Accidents happen, but you being overweight and/or out of shape is totally preventable. Remember in a firefighter’s world, survival is the only benchmark of success!

Until next time please stay safe and remember to, “Train like lives depend on it, because they do”. 4-9-4 – Ed