On the west coast of Vancouver Island, winter warnings of high winds are not out of the ordinary. However, on Dec. 15, 2006, the same winter storms that devastated Vancouver's famed Stanley Park also wrecked havoc on the Vancouver Island community of Sooke. 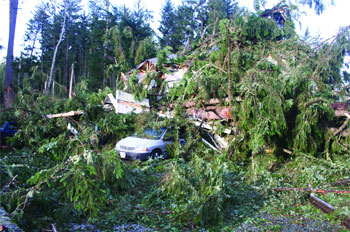 PHOTO COURTESY SOOKE FIRE DEPARTMENT
The home and vehicles of Sooke Fire Department Lt. Murray Lambert were destroyed in the December 2006 windstorm that ripped through the Vancouver Island community and levelled much of Vancouver's Stanley Park.

On the west coast of Vancouver Island, winter warnings of high winds are not out of the ordinary. However, on Dec. 15, 2006, the same winter storms that devastated Vancouver's famed Stanley Park also wrecked havoc on the Vancouver Island community of Sooke.

While several major storms had already lashed the B.C. coast, nobody expected the storm that arrived or the devastation that lay in its wake. With huge trees crashing down throughout the community and wind gusts reaching speeds of up to 175 km/h, members of the Sooke Fire Department were pressed into action when calls for assistance began to flood in. For at least three members of the department those urgent calls would come from home.

The first call came in at 02:24 hours for the duty officer to respond to an area of Highway 14 where a person was trapped in a vehicle when a tree came down, bringing power lines with it. Arriving on scene, Lt. Murray Lambert was faced with several trees across the road, power and phone lines snarled everywhere and three vehicles trapped in the mess.

Realizing that more help was needed, Station 2 was paged out to attend the scene. With winds rapidly picking up speed, crews responded in an engine and heavy rescue unit to assist in cutting trees and removing them from the road to allow traffic to pass. Before the crews could reach Lt. Lambert, several more trees, many over 30 metres long, came crashing down on the road, bringing more wires down and trapping Lt. Lambert in the debris. Firefighters worked feverishly to cut up the trees with chain saws. Fortunately, a road maintenance crew arrived with a backhoe to assist.

As crews worked to clear the road, the devastation the winds were causing quickly became apparent. Pagers were activated for numerous calls all occurring at the same time. Station 1 crews were dispatched to several locations, all reporting trees and power lines down, some on roadways, some on homes, vehicles and outbuildings. Station 2 was called to a three-storey apartment building, only to find an entire section of the roof had blown away and was lying mangled in the parking lot.

While firefighters were working to help others in need, Lt. Lambert received a call from his wife reporting that several large trees had come down on their house and it was destroyed. Fortunately, no one was hurt. Fire Chief Bob Kelsey, who had left his home to set up a command post at the fire station, learned that his personal car had been crushed by a huge tree only moments after pulling out of his driveway in the command vehicle. Clearly no one was immune to the wrath of the fierce storm.
Calls continued to pour in from residents needing help. At this point, every available firefighter and apparatus was on the road, dodging trees, hydro poles, wires, cables and other debris. Crews travelled every road that could be accessed, checking on residents. There was so much debris and tree foliage on the ground that the roads looked green instead of black.

As daylight approached, firefighters were awestruck by the devastation.

Hundreds of trees had come down, most bringing power, phone and cable lines with them. Many hydro poles were broken and power was completely out in the community except for one small area that included a corner store and the transit park-and-ride parking lot. Several homes were crushed under enormous trees and many people awoke to find their vehicles had been flattened. A large number of homes had lost sections of roofing material. In spite of all of this devastation, not one serious injury or fatality was reported.

With no power available, residents were invited to Fire Station1, which is serviced by a large emergency generator. The Emergency Operation Centre was activated and an army of volunteers worked tirelessly to serve hundreds of meals to feed anyone who showed up at the station.

Firefighters returned to the station to get breakfast and then were back on the road, clearing debris and checking on the status of any home that showed signs of damage. As the day progressed, power began to be restored, with the business section coming on line first, approximately 18 hours after the storm began.

For some residents in more rural areas, the wait was up to eight days before power was restored and it took even longer for telephone service to be reconnected. The members of the Sooke Fire Department worked over the next several days, assisting where they could and responding to other emergencies as they arose.

The storm was devastating for many local residents, including three firefighters whose homes were destroyed along with six personal vehicles. Lt. Lambert's family was the worst hit, losing their home and both their vehicles. They weren't able to move back into their rebuilt home until the end of May.

Steve Sorensen is the deputy chief in Sooke, B.C. Nikki Lewers is a public education specialist for the Sooke department.