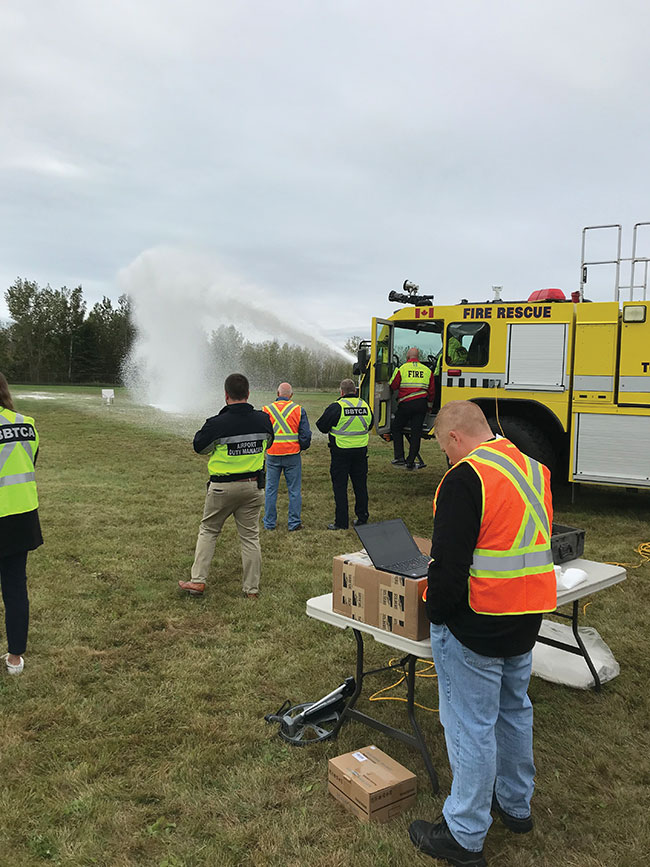 Around the world, fire fighting professionals, facilities managers, regulatory agencies and environmental groups have been engaged in a dialogue about the need to transition to more environmentally benign – or fluorine-free – fire suppressant technology in hangars and fire trucks at airports. At the same time, because the issue is fire safety, the need for assured performance has been one that is inextricably coupled with that transition process. In North America, a region that has traditionally relied on MILSPEC approvals for fire suppressants, the use of fluorine-free foam has not been an option because, to date, no fluorine-free foam technology or product has been certified to the MILSPEC standard.

In July of 2019, Nicholas Robinson, the director general of civil aviation for Transport Canada, issued an exemption from a section of the Aircraft Fire Fighting at Airport and Aerodrome Standards that would allow, under certain conditions, the transition to and use of fluorine-free Aircraft Rescue Fire Fighting (ARFF) fire suppressant technology on fire trucks at every Canadian airport. Among the most relevant of these conditions were:

Foams needed to have International Civil Aviation Organization (ICAO) Level B or C certification depending on the type of aircraft in use at the airport, along with equipment and staffing at the airport.

The new foam technology needed to be demonstrably improved from an environmental standpoint and contain no intentionally added PFAS chemicals.

The actual foam product to be used needed to be tested in existing equipment to ensure proper proportioning of foam concentrate in the water at each discharge port of the ARFF truck and every piece of equipment to transition needed to be live tested.

The latter requirement was logical because unlike previous AFFF fire suppressant foam technologies, which have been in use for decades, fluorine-free foam technology is emerging and different suppliers of these foams have different approaches and formulations as they look to balance firefighting and environmental performance.

Quick action in Toronto
At the time that the Transport Canada exemption was issued, Mark Smith, the Ports Toronto fire chief and emergency response and planning manager, had been in the process of investigating how to improve the environmental and safety performance of the fire suppressant foams in use at Billy Bishop Toronto City Airport. The exemption offered Smith the opportunity to take a big leap into fluorine-free – and he acted quickly.

Solberg re-healing foam concentrates are fluorosurfactant and fluoropolymer-free fire fighting foams designed to replace traditional AFFF and AR-AFFF foams. They can be used to effectively extinguish Class B fuels, avoiding issues of persistence, bioaccumulation or toxic breakdown. The foam concentrates can be used in fresh, salt or brackish water and are formulated to possess excellent burn back resistance due to superior flow and rapid sealing characteristics.

The Move to Fluorine-Free Foam
The search for optimally performing fluorine-free fire fighting foams spans more than two decades. The first successful development of a true synthetic fluorine-free Class B foam was achieved by Ted Schaefer, a formulation chemist working for the 3M Company, and named RF or ‘re-healing foam’ in 2001. Solberg Scandinavian, a forebear of Perimeter Solutions, bought 3Ms patent rights to re-healing foam in 2007 and continued this development as did most other fire fighting foams companies of the time. As the regulatory environment continued to evolve, the efforts to make all foams fluorine-free heated up.

The key issues in developing successful fluorine-free foams include fire fighting performance (measured in their ability to obtain certifications in various regions and applications), long-term stability, handling properties and cost. While traditional Class B foams – AR-AFFF and AFFF – are well established in these areas, technology development efforts for the next generation of fluorine-free concentrates currently represent a balancing act as the new products are implemented as quickly as they can be.

From a certification standpoint, certain Class B fluorine-free foams pass tests in some applications and not others. Aviation foams that pass the ICAO Level B performance standard may not be capable of passing the Level C performance requirements. And still other foams will work well with freshwater, but not seawater.

Viscosity is an issue that needs to be reconsidered in the light of fluorine-free foam development. Studies have shown that some non-Newtonian fluorine-free foams perform just as well as their low-viscosity counterparts in applications like sprinkler systems – an issue that has led to confusion in the industry and should lead to a re-examination of what these designations mean in real world applications.

All these issues notwithstanding, the fire safety industry is making significant strides in the development of high-performing fluorine-free fire fighting foams. A paper given in February at the Joint Oil and Industry Fire Forum (JOIFF) detailed the progress of foams used on Class B fuels over the last five years. For example, in extinguishing Jet A1 fires, in 2021 fluorine-free foam improved by 23 per cent versus similar technology in 2016, leaving it only marginally behind the fluorinated standard. Five years ago, few fluorine-free products could achieve any success on gasoline fires. Today, some fluorine-free foams offer equal or better performance than traditional AR-AFFF foams. Regarding handling and application, in some cases, 3×3 fluorine-free foams have lower viscosity today than their 3×6 fluorine-free counterparts five years ago. The industry is rising to the technology challenge.

Compatibility with equipment a key issue
Understanding that Solberg re-healing RF-3 is a non-Newtonian material, one of Smith’s initial concerns was that his two Oshkosh Striker 1500 firetrucks were accustomed to deploying low viscosity foams.

“I was encouraged when I learned that Perimeter Solutions had experience deploying the RF-3 foam concentrate from OSHKOSH fire trucks,” he said.

Technical personnel went onsite to Billy Bishop airport and worked with ARFF truck manufacturer OSHKOSH and airport personnel to test the fluorine-free foam in existing equipment. The OSHKOSH team led by Seth Newlin, chief engineer of airport products, made minor modifications – primarily poppet valves – to truck equipment onsite to ensure that a minimum three per cent proportioning ratio was maintained in the truck’s discharge ports at all times. During the testing, Transport Canada officials were on site as observers.

At the end of this process, Transport Canada accepted the use of Solberg re-healing RF-3 in place of fluorinated foam. The transition was completed successfully at minimum additional cost to the airport in October 2019, less than four months after the regulatory change.

Said Smith about the transition experience: “I couldn’t have done this alone. I relied on a lot of people—Mark, Mitch, Brian Honey and the team from OSHKOSH. We’re fortunate to have great mechanics at our site.” The site has now been converted to fluorine-free foam for over a year. According to Smith, having gone first, he gets inquiries frequently from airports across Canada.

“I’m happy to have the opportunity to enhance the safety of our fire fighting team and the local community.”