It's the only thing that helps ease the pain for Barb and Jamie Millier, who are still struggling with feelings of guilt and regret for the deaths of 43 horses in a horrific barn fire earlier this year.

''A vet came in, examined a horse that died here . . . and he said the horse died of smoke inhalation,'' says Jamie Millier, choking back tears. ''So at least they didn't burn alive.''

The loss of so many horses at Classy Lane stables – a 54-hectare horse training centre in Puslinch, Ont. – was devastating not only for the Milliers, who own the facility, and the animals' owners and trainers, but the whole rural community. It also made headlines across the country and around the world.

But despite the grief, the Milliers say they had to rebuild and move on.

Four months later, a brand new structure has opened its doors to 42 horses, including Rakin It In, one of only two horses that were not in the burning barn.

Barn 6 was built in the same spot as the original one and it looks the same from the outside, but that's where the similarities end.

The inside of the barn features fire-prevention measures such as smoke and heat detectors, exterior strobe lights and sirens. All electrical appliances are located inside a heated, fire-resistant room in which sprinklers will soon be installed.

The idea is to keep anything that needs power – and therefore a potential ignition source – away from the rest of the barn, says Jamie Millier.

''That might give us a little extra time to get the horses out or put the fire out, if, God forbid, this happens again.''

About 306 metric tonnes of animals have died in 15 barn fires in Ontario this year, including one in London, Ont., where 2,100 pigs were killed, according to the Ministry of Agriculture, Food and Rural Affairs.

While the Classy Lane fire remains under investigation, Jamie Millier says officials have told him the cause of the fire appeared to be electrical. He says they have taken away a small refrigerator and a microwave for further analysis.

The Milliers were in Florida when the fire started.

''You feel a lot of guilt,'' Jamie Millier says.

On Jan. 4, DiCenzo and Mitchell returned from a race with Rakin It In to find the barn aflame. Twelve of their horses, nine that raced and three miniature pet horses, stood in their stalls right where the flames shot through.

They ran to the doors, DiCenzo says, but the fire raged. The lights inside the barn were exploding, the roof collapsing. And the horses were screaming.

''The smoke was so black you couldn't see a foot in front of you,'' he says, his voice catching. But he could hear the horses. They kicked and banged, but they were trapped. It wasn't long before those sounds stopped.

''That's the worst part of it all,'' DiCenzo says. ''The money, yeah it sucks, but we're all going to survive in the end. It's how they had to suffer, that is the worst part.''

Everyone gave themselves to the rebuild, hoping the new barn would lead to healing. Still, Jamie Millier struggles to put the loss into words.

''I don't think you can compare it to losing a son or a daughter – I wouldn't even begin to compare it to that – but it's still a nightmare,'' he says, choking up.

The Milliers say the local fire department was a close partner during the rebuilding of the barn.

''They've allowed us to use them as examples to educate people because they've taken a lot of good fire safety measures,'' says Jason Benn, chief fire prevention officer with Puslinch Fire and Rescue Services.

The Classy Lane fire has also prompted Puslinch Fire to take a closer look at barn fires. Benn says the fire service recently teamed up with a professor at the University of Waterloo, and in late April, they burned a barn, donated by a local family, in the name of research.

''We thought what better way to learn from this then to have one and study it from the beginning,'' he says.

Beth Weckman, an engineering professor who works in the University of Waterloo's fire laboratory, rigged cameras and thermocouples, which measure temperature, inside the barn. After a few small fires, they lit up the barn.

Both Benn and Weckman were surprised at the speed of the blaze. Weckman says the entire interior of the barn was engulfed in flames in two minutes. The roof collapsed in 18 minutes.

''The fire was spreading along both the ceiling and the floor, whereas in a normal house fire, floor materials are not involved until later on in the fire,'' Weckman says.

At Classy Lane, the Milliers are building a memorial – with the names of all the horses that died in the fire – that they hope will help with the healing process.

''We had to order two tombstones because all the names wouldn't fit on one,'' said a teary Barb Millier.

''But it will be beautiful and that's how they should be remembered, as beautiful horses.'' 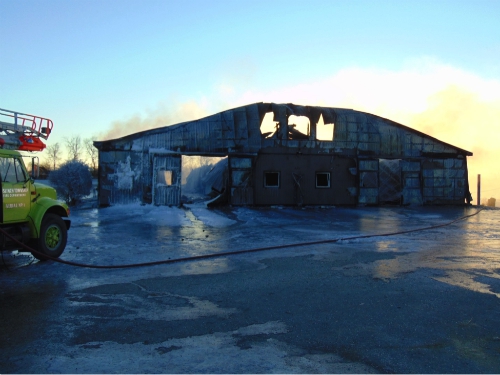