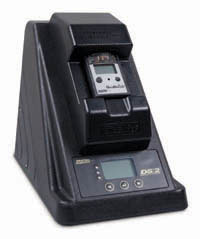 All GasBadge Plus instruments currently in use are compatible with the new docking station and iNet, Industrial Scientific’s automated maintenance and management solution.

The DS2 recognizes individual instrument serial numbers and performs calibration and bump testing according to specific schedules set by the user. Instrument diagnostics and record keeping functions also limit safety hazards and liability concerns for additional peace of mind. Two-way wireless and/or Ethernet connectivity allows DS2s to communicate from remote locations to a central database. The DS2 can support all customer applications from a laptop PC running one to eight DS2s, to complete WAN networks supporting up to 100 DS2s in multiple locations around the world.