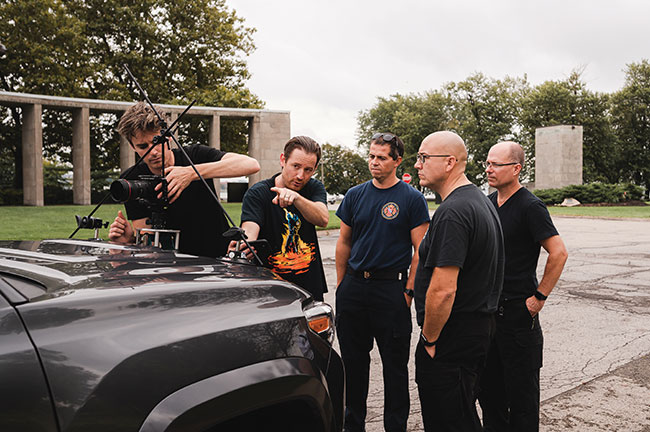 With recruitment for volunteer firefighters an ongoing challenge in many areas across Canada, 12 Niagara-region fire departments recently banded together to produce a recruitment video that they hope will inspire and motivate new volunteers in the area to sign up.

The video runs just under three minutes, cinematically showcasing the Niagara region’s volunteer firefighters working their day jobs as chiropractors, farmers and teachers (just to name a few). Cut to a call coming in on the pager and the scene suddenly shifts. The chiropractor is now donning fire gear and is on-scene expertly strapping an accident victim to a board. The farmer climbs down from his green tractor to join a crew of first responders as they saw the top off a mangled car. Firefighters rush from a pumper truck with hoses in hand to a save a country farmhouse. The scenes play out across familiar landscape, from water rescues on the Niagara River to traversing the Niagara escarpment to reach a fallen hiker. The pulse-quickening, action-packed footage expertly woven together is enough to make viewers consider, “Should I be a volunteer firefighter?”

And that’s exactly what they were hoping for. In the spring of 2021, Jay Plato, deputy chief — community risk reduction — for Niagara-on-the-Lake Fire and Emergency Services, began envisioning a unique way to reach potential new volunteer firefighters. With a majority of new residents to the region coming from the Greater Toronto Area (GTA), where career firefighters are the norm, many simply are not aware that 11 out of 12 departments in the Niagara area use volunteer firefighters in some capacity. At the region’s monthly fire chiefs meeting, Plato raised the issues he was having with recruitment, something the other chiefs were also experiencing. They discussed what a recruitment video could look like if they put their resources together and worked collectively as a team to produce it. All 12 fire chiefs were immediately on board.

“Everyone has a full-time job outside of being a volunteer firefighter. When the pager goes off, you may be working in a kitchen, coaching soccer, or working as a gas technician. Whatever it may be, the pager goes off and you go and help your community,” said Plato.

The vision was to produce something eye-catching, diverse, and inclusive that could be used on social media as well as at community events, presentations, open houses, educational events, and as promotional material within the community.

After a tendering process with various production companies, the committee chose Captivate Photo+Cinema based in St. Catharines, Ont., to produce the video. Their services included scripting, filming, and editing through to the final cut.

“We know the fire world and they know the production world, so we worked together to keep the video realistic,” said Plato. “We didn’t want it to be too glamourized and show something that it’s not. We needed it to be realistic, showing what it’s really like to be a firefighter in our region.”

The timeline from concept to completion took just under a year. Scripts were finalized over the summer of 2021, filming occurred in October of that same year and editing followed with tweaks being made after each rough cut until the final version of the video was delivered this March. Coming up with filming locations and enlisting volunteer firefighters for the variety of scenes became an exciting team effort.

“The region itself really came together,” Plato said. “Every department was throwing out the names of their local parks or dead-end roads where we could film. Everybody was more than willing to immediately provide anything we needed to make this video the best that it could be.” 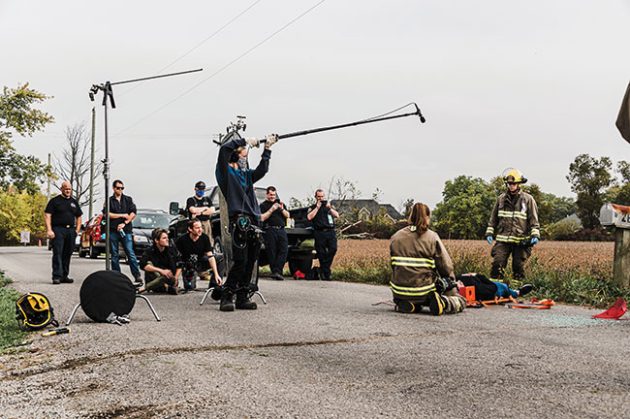 He estimates that by the end of filming, between 60 and 70 firefighters had volunteered to be in the video. The various municipal departments were quick to offer apparatus for background shots to ensure the scenes were as accurate as possible. Footage showing firefighters in their alternate places of work meant opening up private office spaces and worksites to film crews – something the firefighters did with speed and grace. Plato said the team effort of everyone involved was foundational to the success of the project.

The overall budget was approximately $10,000, which allowed for high-quality footage using drones and professional cameras over seven full days of filming – and of course, the months of editing required to put it all together. The sizable budget, which is actually not that sizable in the film production world, was only possible because of the collaboration between the region’s fire departments.

“You can’t just find an extra $10,000 lying around. So, we took it to the association to see if there were funds available to help produce the video, which will ultimately better fire departments across the region. Everyone’s going to own it, utilize it and better their recruitment, so that made it much more palatable,” said Plato.

It’s a model that could be easily replicated by other fire departments across Canada who are interested in producing a recruitment video for their particular regions. After going through the process, Plato offered this advice: “It’s all about the team effort. Everybody chipping in was huge. If you don’t have the buy-in from everybody, you won’t have the product you’re looking to achieve. The minute we said, ‘Let’s do this,’ all 12 municipalities were in and wanted to provide whatever was needed to make it happen.”

While the team effort was clearly on full display for this project, Plato says that one of the most important steps they took was to establish the three-person committee to lead the project, something that proved vital in maintaining timely decision-making during the production process. Fewer trusted hands to manage the many day-to-day details meant the team could quickly pivot as needed, making speedy decisions which resulted in keeping to the timeline.

And, his final piece of advice: Consider the weather when you put your production schedule together. Droves of mosquitos dive-bombing the crew during a scene can cause some major irritation, while rainy days will quickly push back filming, and ultimately push back final delivery.

The goal for the recruitment video was to allow citizens to see themselves in the footage; to pique their interest and show that they can serve their community by becoming a volunteer firefighter.

“At the end of the day, it’s about recruitment and trying to maintain our volunteer fire departments. From the chiropractor working on a patient’s neck to the soccer coach wrapping an ankle, the things you do in your everyday life can be transferrable skills.”

By using the video to raise awareness about how the surrounding community fills these crucial volunteer fire fighting positions, Niagara’s fire chiefs hope they’ll see an uptick in new recruits. •