For close to twenty years,  NFPA 1620 has been the de facto standard for pre-incident planning in North America. NFPA 1620 specifies the minimum information that needs to be part of a pre-incident fire plan, which includes a building’s occupancy and use, architecture and design, safety features and equipment, surrounding buildings, entrances and exits, and contact information of managing staff. 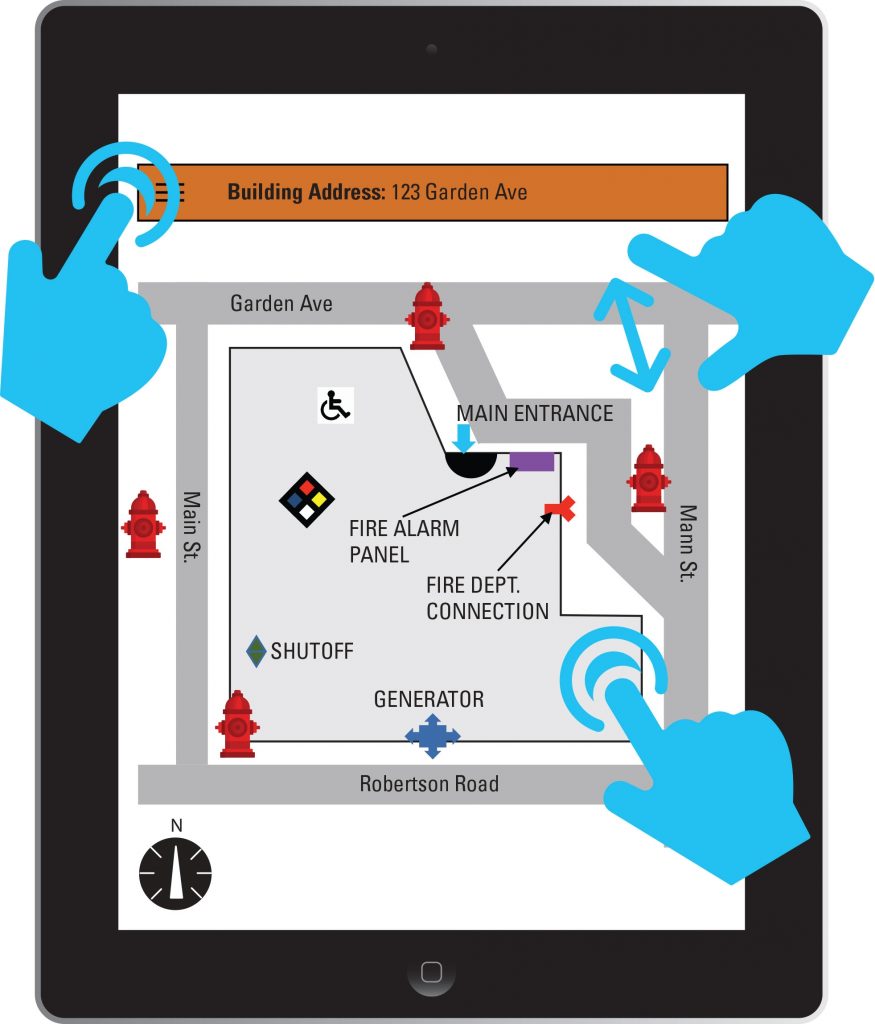 Schematic diagram of an integrated presentation using annotated images. Users can tap to show a selectable list of building information items For close to twenty years

While the standard specifies the minimum information, it does not specify a presentation format, which has given fire departments the ability to design their own pre-incident plans. In fact, because compliance with NFPA 1620 is voluntary, most cities end up with short pre-incident plans that only cover part of the standard.

A typical pre-incident plan consists mainly of a textual description of a building divided into several groups. Oftentimes, part of this information is projected onto a floor plan or an aerial view of the building (i.e. a visual description) in the form of image annotations. However, because such annotations can make an image too difficult to read, only a small number of annotations are typically used. Most cities produce pre-incident fire plans in paper format. A fire truck typically has a folder of pre-incident fire plans for some (sometime most) buildings in its service area.

Current usability of pre-incident fire plans is limited by its paper-based nature and the difficulty of preparing, maintaining, reproducing, and accessing to these plans. Had an alternative medium been used to present pre-incident fire plans, these limitations could easily be avoided. Such an alternative medium could be the smart mobile technology (i.e. smartphones and tablets), which is gaining momentum amongst Canadian firefighters. Seen as a catalyst for technological interoperability between different first responder groups; these devices facilitate seamless voice and data communication in an emergency. While these devices are currently using commercial cellular networks, in the future they will be using the national Public Safety Broadband Network (PSBN) that will provide public-safety-grade coverage, robustness, resilience, and security. Smart mobile devices have several attractive features that make it an optimal medium to present and access pre-incident fire plans. These include portability, inherent capability to display visual content, zooming capability using pinch-to-zoom, very large storage capacity, flexible scalability, and identity management capabilities (such as access codes and fingerprints).

Accordingly, smart mobile devices can unveil the true potentials of pre-incident planning by giving firefighters the necessary information at the right time and at the right location. However, because there can be an infinite number of different ways to present a pre-incident fire plan on a smart mobile device, there is a need for identifying the key elements of the most preferred presentation format. Such a presentation will play a pivotal role in bridging any incompatibility issues and facilitate technological interoperability between different firefighting groups. To identify these elements, a team of researchers from the University of Ottawa conducted a survey of the Canadian firefighting professionals. The survey, sponsored by APX Data, was circulated to fire departments in 84 cities over 36 days (Jan. 10, 2017 to Feb. 15, 2017) and collected 74 responses.

■ The survey
This survey had two objectives. First, to help Canadian firefighters reflect their needs and preferences about presenting pre-incident fire plans on smart mobile devices, which can be a seminal step towards achieving technological interoperability. Second, helping the sponsoring software company, APX Data, understand the needs and preferences of their prospective customers. The survey consisted of four sections. The first section asked about roles, experience, age range, and whether respondents use smart mobile devices. The second section included questions about respondent satisfaction with the content of their current pre-incident fire plans, the grouping of information in these plans, and the first five things that they wish to know about a building while en route. Respondents were also asked to classify a list of building information items as “en route” and “on site” information. The third section had questions about the essence of including elements in a pre-incident fire plan, and the customization of information presentation based on a firefighter’s role, rank, or arrival time. It also asked respondents about the use of annotated images, slideshows versus thumbnails, categorized and selectable text, and the interplay between textual information and visual information. Finally, section four asked about their perspective about an integrated presentation where images and selectable text are interconnected in multiple ways.

One message that came clear out of this survey is that firefighters want every firefighter on a fire ground to have access to the same building’s information as everyone else regardless of arrival time, rank, or job description (97 per cent). However, when asked about the presentation format (not the information content), 39 per cent thought that some customization based on rank, arrival time, or job description could be helpful.

■ Conclusions
By looking at the results, it becomes clear that firefighters are aware of the advantages of using smart mobile devices to access pre-incident fire plans. Fire departments often ignored parts of NFPA 1620 to keep their pre-incident fire plans short. With smart mobile devices, firefighters can leverage the full potentials of NFPA 1620 if information is presented in an intuitive and user-friendly format that maintains their operational integrity. More specifically, firefighters prefer an integrated presentation where annotated images are used to link different information items to their perspective locations. Firefighters expect to see a summary of building information while en route to the scene. Once on a fire ground, firefighters want every firefighter to have access to the same amount of information regardless of rank, role, or arrival time.