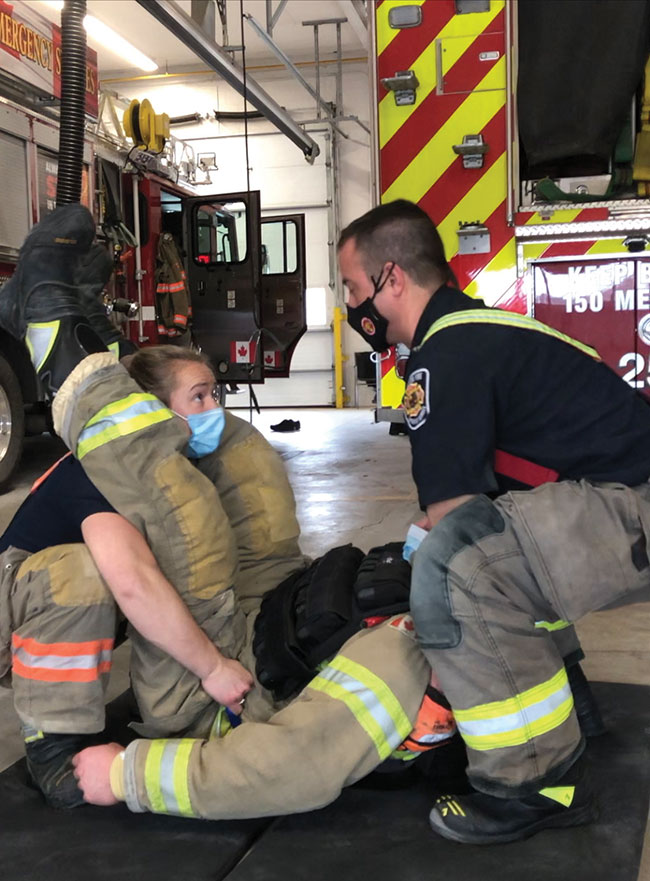 Are you prepared to rescue the bariatric patient?

At a recent fire we were confronted with this very question. Our initial update included the report of a basement fire, people trapped and explosions coming from the basement area. On approach we noticed smoke coming from the front door and occupants exiting the house. During our initial engagement we began by advancing a 45 mm handline and gathered information. During the size-up we determined that everyone upstairs had evacuated the premises. We were advised by the homeowner, who had self evacuated, that a woman and her child were still in the basement, and we were given their location. The hose line was redirected to a side entrance where an exterior door was cut into the side of the building. This led us to a shared room full of pressurized smoke. Upon entering and descending the narrowed set of stairs, the smoke thinned where a closed and locked door was located against the bottom of the step. This was an accessory basement apartment that did not meet building code.

We forced the door open to encounter a high heat zero visibility environment. This vent limited fire had used all the available oxygen and began reacting quickly to the flow path created from an uncontrolled door. The hose line was moved into position, and while the fire was being extinguished, a simultaneous rescue effort was underway. The woman and child were located and taken to the only means of egress, which was the narrowed staircase.  The child was rescued up and out of the basement in a matter of seconds. The woman, weighing 385 pounds, was not as easy.

The team who had made the grab required additional assistance with the rescue. We assigned one firefighter to continue with extinguishment while the other two assisted with the rescue. The rescue technique chosen was the fore-and-aft as the narrowed staircase did not allow for firefighters to work side by side but in succession only. One firefighter positioned themselves at the woman’s head while reaching under the arms and cross gripping the wrists. The second firefighter’s SCBA low air alarms activated as they were securing the patient. With each attempt to carry the woman up the stairs, her naked and slippery body escaped the grasp of the firefighters’ arms. Communications were made immediately that more resources would be required to extricate the patient. We continued with the fore-and-aft method until another on scene crew relieved us.

The crews on scene rotated often while applying the various rescue techniques they were familiar with. We used many techniques such as the fore-and-aft, sticky straps (hasty harness), ladder and finally the scoop stretcher. Rescuing this bariatric patient was a specialized operation.

It is important to consider the risk of firefighter injury during this type of rescue. More than half (62 per cent) of all prehospital provider back injuries resulted from lifting patients. Injuries are a consequence of three major factors. The significant lifting forces (patient weight), repetitive movements and awkward positions (Ref 2). Firefighters performing rescue operations do not have the luxury of a controlled environment, visibility, and time. Our patients are extricated under war like conditions.

Currently our job performance requirements do not include demonstrating a rescue technique suited to the larger patient, but solely with techniques suited to the 165-pound manikin and firefighter rescue techniques. The fire service needs to recognize that the bariatric rescue is a specialized operation requiring resources, tools, and specific training to be successful. Until then we’ll address this problem ourselves.

Our approach uses the National Fire Protection Associations (NFPA) 1407 standard for rapid intervention training as it addresses the need to train firefighters to locate and rescue lost, trapped, and injured firefighters employing specialized extrication techniques to move firefighters up the stairs, down the stairs and out of windows etc.  The same techniques and concepts can be employed towards the bariatric patient.

How do we bridge the gap between bariatric rescue and that of a firefighter? By making a rescue harness built in seconds that mimics that of a firefighter’s SCBA harness. The harness is simple in design, easy to make under harsh conditions and can be applied to various sized patient in seconds. Specialized rescue techniques reserved to rescue firefighters can now be applied once the bariatric patient. Dragging lifting or carrying a patient on grade, up-stairs or down stairs is now methodical in its approach. 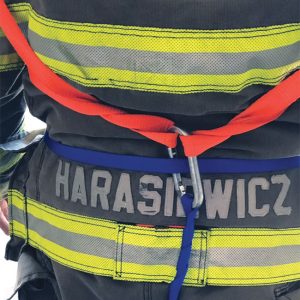 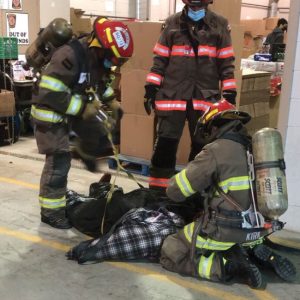 Training to the new technique.

Building a rescue harness that will accommodate bariatric and non-bariatric patients rescue harness combines two continuous loop webbing and a carabiner connecting the two interconnected systems along the spine. The system is best taught as two independent systems but meant to be built simultaneously.

How to build a reverse Swiss seat harness suited to your patient’s size:

How to building a chest harness:

A bariatric rescue requires a considerable amount of time effort and resources and should be considered a specialized operation. Firefighters choosing to build and use a rescue harness have the tools to affect this specialized rescue. This enables them to carry lift and drag a patient upstairs downstairs or on a grade. Professional teams using the right tools and moving as a synchronized unit making the greatest impact towards saving life.

If we could go back in time, could the initial crew have affected the rescue using this new approach?  Yes. Building a bariatric rescue harness and applying the RIT approaches learned, we could have easily extricated the 385-pound woman up the stairs.

Jared Newcombe is a captain and a 28-year veteran of the Brampton Fire and Emergency Services in Ontario.