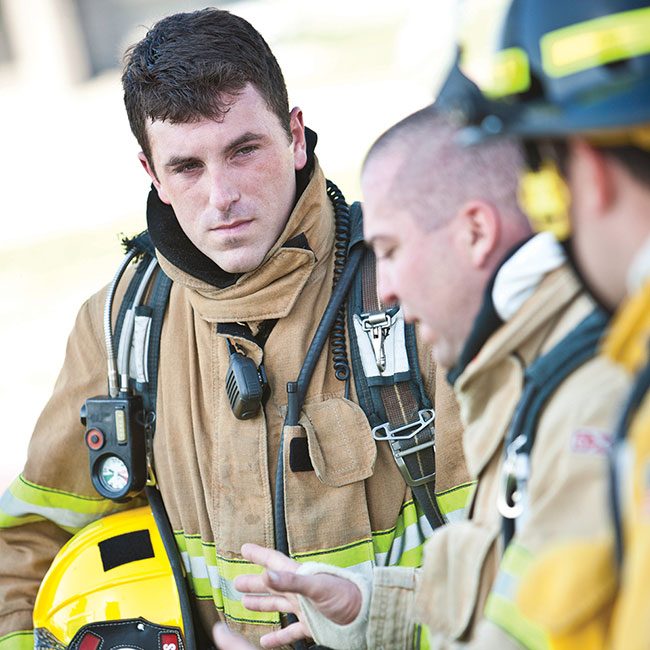 Officers need to be taught how to recognize and resolve problems when they are small. Photo: Getty Images

During my 30 years of being a training officer in a volunteer department, I have witnessed a lot of changes. Our bunker gear is lighter and safer, our SCBA is much more efficient and with the introduction of computers (yes, I remember when we didn’t have one in the hall) our communications, pre-plans, record keeping, training and resources are state-of-the-art.

Yet, in my opinion there is still one area of grave concern in today’s volunteer, paid-on-call fire departments. Here it is: volunteer firefighters taking on an officer’s role without really understanding that role, be it lieutenant or chief. Although many are more than willing to do a good job, they are not provided with any kind of training.

There are three books I recommend for every fire officer: Igniting the Leader Within: Inspiring Motivating, and Influencing Others by Michael F. Staley; Fire Officer Principles and Practice by Michael J. Ward and Making a Difference: The Fire Officer’s Role published by Onguard Inc.

It may surprise you but the biggest obstacle for officers is not administrative in nature, nor is it training, or being the incident commander on the fireground. It is dealing with the departments most valuable commodity — the firefighters themselves.

What has most drained my energy and zeal for fire fighting these past years is having to deal with difficult people. As an officer you will be called on to deal with interpersonal conflict among your members and I’m not referring to a simple disagreement between two firefighters. An interpersonal conflict is a disagreement between two or more people or subgroups of an organization involving significant resentment and unhappiness.

Some of the most difficult situations for a fire officer are times when you must act as the referee between firefighters. Not being able to size up these situations can worsen the conflict, or worse, drag you into it.

Officers need to be taught how to recognize and resolve problems when they are small. A good leader knows that conflict resolution begins before the struggle occurs. It may help to keep a watch over those members who can be difficult, and get to know their triggers.

We all know people who are hard to deal with. Some people are too demanding or abrasive, others may be arrogant or emotionally abusive. It may help to consider that everybody is somebody’s difficult person. However, there is a big difference between being difficult and being toxic. Dealing with toxic people is like walking in a minefield; it can be quite stressful. Taking the wrong approach with these firefighters can make matters worse rather than better.

Avoidance does not work. If a problem escalates to where two people argue constantly and spread rumors about each other, you will have a much harder time resolving the underlying conflict. It is possible for an officer to both overreact and underreact. I refer to these as “over and under” problems.

As an officer, your most useful role in conflict resolution is being a neutral third party. You cannot do this if you appear to take sides in the dispute. Yes, sometimes one person is more at fault than another, but when you’re dealing with an ongoing conflict that continues to escalate, it is likely that both members are involved in the battle. If you have a conflict of interest and it is impossible to remain neutral, you should ask for help from someone who can be neutral, such as another officer. Officers must also learn how to recognize problems that are beyond their scope of authority or influence and know how to get help in these situations.

Along with the three officer books I recommended, as a chaplin, my go to book is the Bible. There is a wealth of information contained within its pages regarding conflict resolution. One verse in particular reads, “A hot-tempered person stirs up conflict, but the one who is patient calms a quarrel.” Proverbs 15:18.

Basically, hot tempers cause arguments, but patience brings peace. As an officer dealing with members in conflict, it is imperative you stay on point and remain patient and calm. I have friends who love to stir things up, they will argue for the sake of arguing. There is no place for that in an already toxic environment.

Being in a volunteer department means we are open to all sorts of people coming through the hall doors, however not every applicant is a good fit. It is easy to overlook certain indicators of toxicity, especially with the shortage of volunteers. We have had toxic people slip through the cracks and it did not end well. It might be easier if people came with warning signs: Danger: Toxic Person.

When team cohesion dwindles, team safety suffers. Most certainly the much needed confidence that we have each other’s backs erodes quickly in a toxic environment. Like ingesting poison, a steady diet of destructive conflict can and will kill your department.

Ongoing conflict can manifest as physical stress. This can result in physical changes to an individual, such as low energy, headaches, nausea, aches, pains, tense muscles, chest pain, rapid heartbeats, insomnia, etc. Your whole department can be adversely affected by ongoing conflicts and it is near impossible to recruit new members in a toxic environment of unresolved conflict.

Simply put it isn’t the mountains ahead (the big conflicts) that wear us out, it is the unrepaired pothole that throws our alignment (our harmony and team cohesion) out of whack.

Putting an unequipped officer into these situations is not only unfair, it is a recipe for disaster. To prepare officers, I suggest departments develop officer training classes as well as a conflict resolution team. An officer shouldn’t go it alone.

I’ll wrap up these observations:

The truth is, we are going to have conflict whether we like it or not. It is a part of life we can’t control. But remember, if conflict is ignored there is a strong chance that it will continue. Stay safe and as always train like lives depend on it, because they do.