Features
Grief in the Fire hall 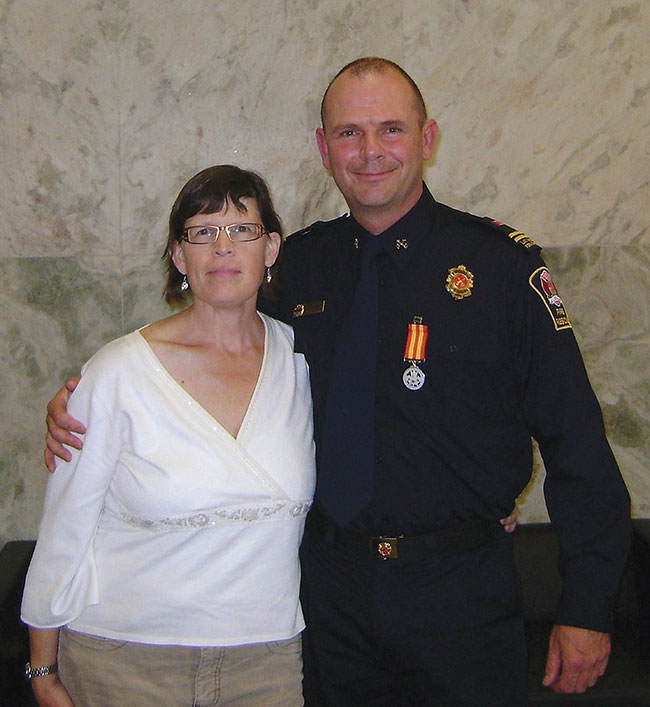 David Moseley with his wife Chris, who died of cancer.

Grief is a big thing. If you’ve been touched by it you know that can be an understatement. It’s universal and will affect us all but also unique. This article will take a look at one person’s grief – mine — and some ways I’ve coped. It will look at the impacts within a fire setting, realizing it is really much bigger than that, too.

Chris and I had a good marriage; a simple, comfortable life. You could say boring, but what we wouldn’t have done for another 20 years of boring. She’d been feeling not right over the winter, but from the day we found she was seriously ill it was only six weeks before she was dead.

Those six weeks were both awful and wonderful. Cancer wasn’t kind to her. Yet, we had time to talk, cry, plan and grieve our lost future together. She told me she felt nothing went unsaid. She was so grateful for our 28 years, for the eight years since her initial cancer treatment, and, above all else, for our two boys. I laid in our bed with her and held her hand as she let out her last breath.

I managed the initial weeks, the funeral, and return to work. It was rough but I was functioning. Thought I had a long way to go but was on my way. I was only sleeping four or five hours a night and having constant chest pain. At work, I was just going through the motions, finding no meaning or joy in it, but it was manageable.

Then, about five weeks after Chris died, came the worst two weeks of my life. It was like a barrage or waves of pain hit me. I’d be shocked to be brought lower again and again, not believing this couldn’t be bottom to be brought lower still. Two trips to the emergency room found my chest pain wasn’t a heart attack – just a broken heart.

I felt like I was suffocating, being smothered. I thought I would be better off dead. I might not join Chris, but I’d no longer miss her. One night, convinced I would die, I wrote the boys a note, tidied the house and lay down to die. There were times when giving up was the only way.

We had a great life. Why would I feel guilty? Because I was alive and she was dead. I hated myself for that. My being alive and everything beautiful in the world seemed like an insult to her.

Then I truly felt I’d hit bottom. I began to feel different and had to admit better. I shifted from agony to feeling lost and desolate. When I say “lost” I mean it. I was confused, disoriented. I was no longer half of “Chris and Dave” so who was I? I felt so empty and lonely living life at about 20-per-cent capacity.

And while I felt better, it persisted. The weeks turned into months and the accumulated weight of grief wore me down. It went on and on. In the fall I stalled. As winter set in, I lost ground. Poor health saw me shed 20 pounds, had my mind screaming cancer. This scare perhaps focused my mind on the living world, and paired with the return of spring, helped propel me forward.

My grief now seems to take two main forms: missing Chris and being lonely. In my mind, the goal is to come to terms with both and accept and settle into this new life. I think I’m getting there.

Grief is both universal and unique to individuals. What has helped me may not be what somebody else finds useful. Struggling for some sense of control early on, I selected two strategies. One was to not hold back but let it all out. I would talk and write for hours. The other was to study grief and learn all I could about it.

I was fortunate to have two or three close friends I could repeatedly come back to, as well as a wide network of others I could rely on for an occasional phone call. While my journal can make grim reading, it does allow me to get things out and look back and see that I actually have made progress. Acknowledging how awful it has been can make still being alive seem like an accomplishment.

Studying grief, I developed what I called my grief library. I soon read several things that may seem obvious, but still surprised me, such as how big grief is, how unique it is to each person, and how long it lasts. What else helped? Self-care, eating well, exercising, trying for normal sleep. Professional help from a counsellor. The simplest suggestion I found was that whatever feels good, do that. For me that was time outdoors and what I call my baby therapy. It’s hard not to feel better holding a baby. Helping others and volunteering also helped take me outside myself.

Following are the four things I found most helpful from others:

Everyone handles grief differently and this can bring a major realignment of friends. Some people I expected more from just disappeared while others emerged that I didn’t expect and I’ll be forever grateful to them.

As you can see, grief applies to all aspects of life, but what about fire fighting? Two weeks after the Chris’ death, I turned my radio back on and an hour later I was in command of a fully involved trailer fire. As meaningless and hollow as the experience was, I was capable of the mechanics of command, and retained the focus and situational awareness to keep myself and others safe. That same week I led an attack line at another fire and assisted with two overdoses. Fire fighting seemed to be okay. The worst part was coming home to an empty house afterwards.

It wasn’t all business as usual though. Due to not sleeping well, it was a month before I left my radio on at night. There were administrative processes that I pushed aside. The meticulous attention to detail and the need to analyze and organize large volumes of data for a wildfire investigation was just beyond me. The way I was sleeping and feeling, I simply couldn’t face two weeks in a tent and camp food. I was good for short stints. My employer insisted the night I spent putting dozer guard around a high-profile fire was a big contribution, but it didn’t feel like much in a busy fire season.

As with trauma, I wasn’t sure how much grief contributed to irritability and occasional outbursts of anger. This was tolerated as it was followed with the same apologies as usual and not frequent enough to raise alarm or disrupt the team.

Then, five months after Chris died came the worst call of my career. For a week or two it was a serious setback. Yet, in a sense the perspective of my grief may have helped me through it. I told myself we honoured that person with our actions and now it was up to those who loved them to honour them with their grief. I felt able to let that go and get back to grieving Chris.

The support I received from my fire family was huge. There were steadfast firefighters who were constantly there for me. I was disappointed, however, at how many others weren’t. When I raised this sentiment with them, they told me they didn’t realize I was struggling because I hid it so well. That surprised me, but then I realized I cry more in one day than I would before in years, and I’d been doing that for over 200 days, yet I hadn’t let one person witness that. Sometimes all you need do to get help, is ask for it.

A caution or two in closing. My grief feels big, but it’s not complex. Suicide, poor relationships, multiple bereavements and other factors can make grief more complex and harder to manage. If your grief is either big or complex, I really recommend professional help.

The decision to return to active duty two weeks after the death of Chris seems to have been the right choice for me, but might not be for others. None of us are perfect, but we can’t help others without first adequately looking after ourselves.

Finally, the thought of suicide in this situation is normal. Holding on to that thought, nursing it or considering it a viable option is not and requires intervention.

As firefighters, we are used to helping others. Receiving help ourselves, nevermind asking for it, can be difficult. These days, we are doing so much better at acknowledging and addressing the trauma that our work inflicts on us. Despite how common it is, let’s also recognize how much impact grief can have on ourselves and others, and give and receive the support we need to endure that too.

David Moseley is a forest officer with Alberta Agriculture and Forestry, and officer with Lac La Biche County Fire Rescue in Alberta, focused on operations. His other areas of interest include instructing, CISM and wildfire investigation. Contact him at david.moseley@gov.ab.ca